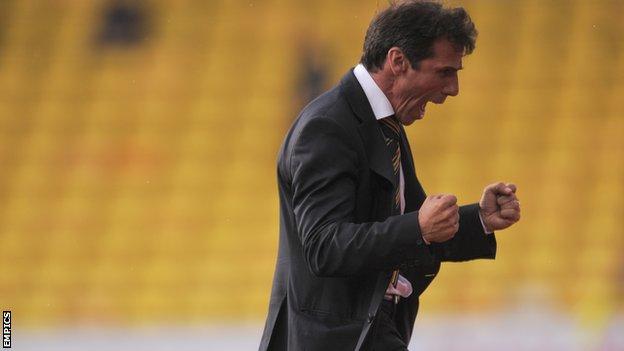 Gianfranco Zola has urged his Watford side to remain 'calm and in control' after an impressive run of form.

The Hornets are unbeaten in their last six games and have risen from 16th to eighth in the Championship table.

"We haven't done anything yet. There are a lot of areas where the team has to improve in order to start thinking in a more ambitious way."

He continued: "I like to be always balanced. We were not a bad team when we lost three games in a row. We are not a perfect team now that we have done well in the last few games.

"We need to keep working and keep on the ground. If we manage to do that the improvements will be even bigger.

Since Zola's appointment in July, the club have signed 16 new players, 12 of them on loan from Udinese and Granada, clubs also owned by the Pozzo family.

And the Italian says he will bide his time before making any further acquisitions when the transfer window opens in January.

"It's too early. We are doing well.

"Now I want to see what we can do in December and see if we can improve the team or do something else," he added.

"I've got a month with a lot of games and I want to see how we get on."