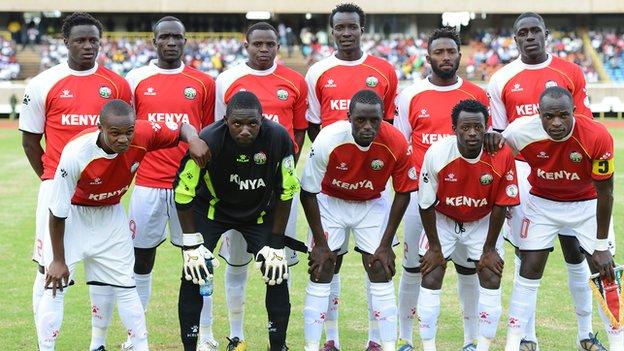 Kenya beat Ethiopia 3-1 to secure a place in the last eight of the east and central African regional championship, the Cecafa Senior Challenge, in Uganda.

The Harmabee stars clinched the runners-up spot in Group A behind defending champions Uganda, who beat South Sudan 4-0 in their final group game on Friday.

Defeat for Ethiopia, who qualified for the 2013 Africa Cup of Nations, means they must wait to see if they are one of the two best third-places nations.

Kenya scored through Rama Salim in the 20th minute before Clifford Miheso made it 2-0 seven minutes later with a header.

Ethiopia hit back before half-time with a goal by Elias Mamu who caught the Harambee Stars back-line off guard.

After the break the Ethiopians came back strongly and dominated possession, but Kenya stood firm and a David Ochieng header 18 minutes from time sealed the three points.

Kenya's coach for the tournament, James Nandwa, delared he was happy that his team has continued to improve since losing to Uganda in the opening match.

"We are going to plan very well for the quarter-finals now," he said.

Vietnam-based Brian Umony scored a brace for Uganda and Robert Ssentongo and Hamis Diego Kiiza scored a goal apiece as the Cranes, who had already qualified for the quarter-finals, romped home.

Uganda coach Bobby Williamson made six changes to his team that played against Kenya and Ethiopia in the first two games.

"It's nice to see the boys score some goals today and I hope we get better and better," he said.

South Sudan head home from their first international tournament having lost all three of their matches, conceding seven goals and failing to find the target.

In Saturday's final Group B games Sudan will face Burundi and Somalia take on Tanzania.

Group C also wraps up on Saturday as guest side Malawi take on Zanzibar, while Rwanda play Eritrea.

The quarter-finals of the tournament start on 3 December .