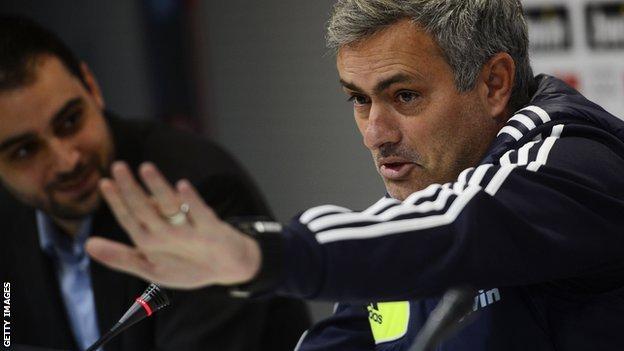 Real Madrid manager Jose Mourinho has dismissed suggestions he is under pressure ahead of the La Liga derby against Atletico Madrid.

After just 13 games, the champions are already 11 points behind leaders Barcelona and eight points adrift of second-placed Atletico.

"My relationship with the players and the club is like it has always been," said Mourinho.

"I have perfect health and I am working as I have done for many years."

Having suffered just two defeats in the whole of last season, Mourinho's side have already lost three times in this campaign after last weekend's 1-0 loss to Real Betis.

Spanish media are speculating whether the Portuguese boss will still be in charge at the Bernabeu at the end of the season, but the former Chelsea and Inter Milan manager is relaxed about the situation.

"This is not a courtroom but a press conference," he told journalists.

"I am just an employee of the club and it is they who decide if they are happy with what they have but I have a very, very, very good relationship with the president and the board."

Reports suggested last season that Mourinho had fallen out with defender Sergio Ramos and goalkeeper Iker Casillas but the Real Madrid captain has given his full support to his manager.

"Only a few months ago the shouts were applause and praise that we had won the league but in football memories are very short," said Casillas.

"Mourinho led the team to the title with a record number of points and goals. We should remember the good moments and look to continue the project."

It is almost 14 years since Atletico went into the fixture with more La Liga points than Real.

Real will face in-form striker Radamel Falcao, who has scored 14 in 13 games in all competitions this season, and the Colombian felt confident ahead of the encounter.

"I don't feel as much pressure as motivation," said Falcao.

"We play a great side and it will be a high-tempo match but we will go out looking to win."