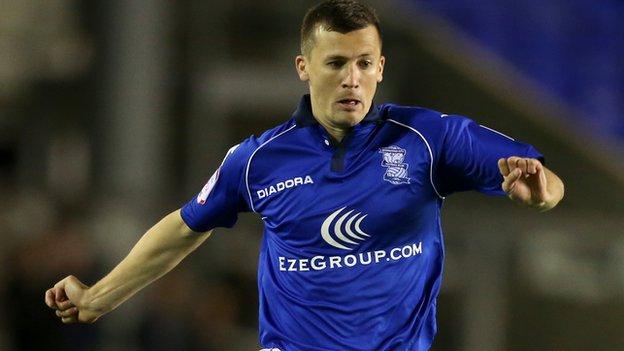 Fit-again Birmingham City full-back Paul Caddis admits that falling out with Paolo Di Canio has not turned out to be such a bad career move.

Having moved to Blues from Swindon on a season-long loan after being stripped of the captaincy at the County Ground by Di Canio,

But Blues's medical team have got him back fit again ahead of schedule.

"Maybe it was not so bad I fell out with the manager," Caddis told BBC WM.

"Originally the plan was after Christmas. But I've got to give a lot of credit to the physios here, who have worked me very hard in the gym.

Christmas-time is important when games come thick and fast. Three wins gets you up in the play-offs and I don't see why we can't do that

"I've done a lot with the fitness coach and adrenaline's a strong thing. That got me though that first game back at Blackpool.

"But there's no chance I could have got to this stage had I still been back at at Swindon as the facilities are so much better here."

After making an unexpected comeback in Blues' 1-1 draw at Blackpool, the gritty Scot has now come through three games in 11 days, having been on the winning side when Lee Clark's men then beat Middlesbrough 3-2, only to be part of a losing side at Molineux on Saturday when they were beaten 1-0 by a Marlon King own goal.

"We created a lot of chances, but we just didn't get the goal we deserved and then got done by a sucker punch," added Caddis.

"After picking up a couple of good results, it seems like we've taken three steps forward, only to take two back.

"But there's no reason why we can't bounce back again with the character we have in this dressing room."

Saturday's defeat dropped Blues back to 19th in the Championship table, but in a tightly-compacted league, they remain just nine points adrift of the play-offs.

"We've got to aim for the top end," added the Scot. "And, if you look at the individuals in the team, I don't see why we can't do it.

"It's hard to pick where it's gone wrong this year, but we can still kick on.

"Christmas-time is important when games come thick and fast. Three wins gets you up in the play-offs and I don't see why we can't do that."

Ayrshire-born Caddis will approach Christmas in a very positive frame of mind after 12 months of peaks and troughs, no more so than when the mercurial Di Canio stripped him of the Swindon captaincy in August, claiming that the new father's enthusiasm for football had dipped in the two months following the birth of his son.

"It's been quite a year," he grinned ruefully. "We won promotion, I was made club captain, then me and the manager had a few words, and I lost the captain's armband, but I ended up in the Championship."

Caddis freely admits that it is a different story under Clark, who has described him as a "low-maintenance" professional.

"I just know the manager has confidence in me," he said. "And I hope I can make the move permanent."