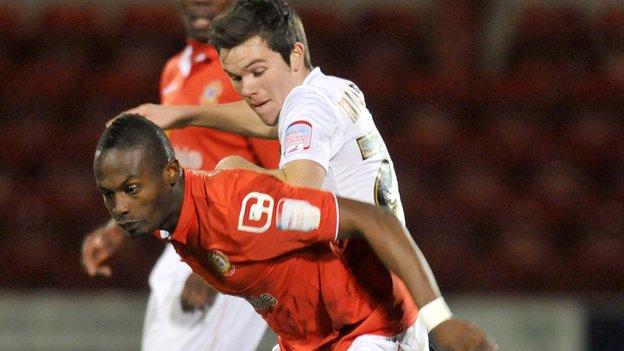 After drawing 1-1 in 90 minutes, the Alex then converted all their spot kicks for a 5-3 victory at Gresty Road.

"They practise them and we had seven or eight wanting to take them. That's what we want," Baker told BBC Radio Stoke.

"You don't want to force them into it. I was pleased so many stepped forward."

But the experienced Robbie Blake hit the bar and all the home side's chosen penalty takers held their nerve from 12 yards, full-back Gregor Robertson sending the keeper the wrong way to steer his side into Saturday morning's northern section semi-final draw - two rounds from Wembley.

"It wasn't a great game," admitted Baker. "For the first half an hour, it was disjointed.

"But we're just pleased to be in the next round. Let's hope for another home draw."

Fit-again keeper Steve Phillips came in for his first appearance of the season in place of Alan Martin. And another of last season's promotion-winning stalwarts, centre-half Adam Dugdale, replaced Mark Ellis.

Clayton did well, providing the cross from which Pogba headed his ninth goal of the season to fire Crewe in front in first-half stoppage time.

But defeat came at a cost late on when full-back Matt Tootle was sent off for the first time in his career for a second bookable offence.