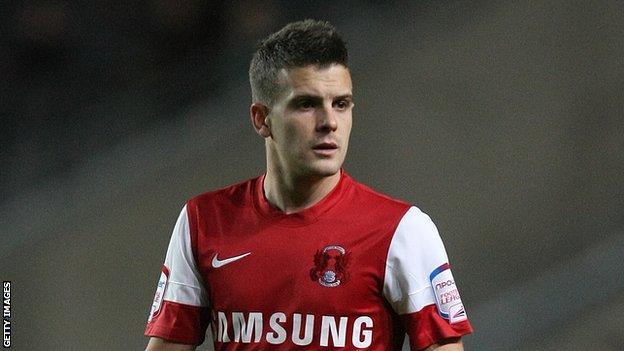 Leyton Orient winger Dean Cox says they are high on confidence ahead of their FA Cup second round tie at Alfreton.

The O's have won their last five games in all competitions.

"We've changed the formation to a 4-4-2 which has allowed us to get more crosses in the box and cause damage in the area," Cox told BBC London 94.9.

"It couldn't come at a better time. If we acquit ourselves as well as we have in the last five games, hopefully that will see us through."

The flourishing partnership between strikers Kevin Lisbie and David Mooney has been a major factor in Orient's recent improvement.

"Kevin Lisbie has come back and is on fire. He's our star player, our catalyst and it's always great to see him on the pitch. Him and David Mooney have been banging in goals," 28-year-old Cox said.

"The wide boys have got to put in the crosses for them to score their goals. Me and Cooky [Lee Cook] are doing our jobs at the moment and if they keep getting on the end of them, we'll all be happy."

Orient, who reached the fifth round stage two seasons ago before being outclassed by Arsenal, are taking nothing for granted against their Blue Square Bet Premier opponents.

"We will go there with our game plan and show Alfreton a bit of respect as they have done well in their league," Cox added.

"We've watched a video of them and they are no mugs. They deserve their place in the second round but we will concentrate on our game."