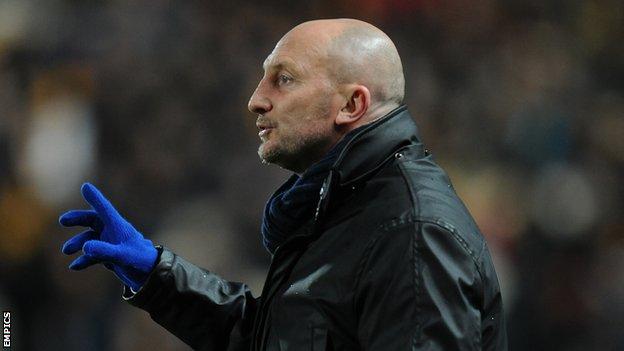 New Crystal Palace boss Ian Holloway says he is baffled by the rivalry between the Eagles and Brighton.

The clubs meet at Selhurst Park on Saturday for the first time since Holloway took over earlier this month.

"It's not one the rest of football knows about. Even the geography doesn't really make sense," Holloway said.

"It's a bit weird but whatever fans think, you have to appreciate that and give a performance the fans are proud of. I've got no doubts we can do that."

The rivalry between Brighton and Crystal Palace was at its height in the late 1970s and the 1980s.

However the sides have only met six times in the past 10 years:

Animosity between former Tottenham team-mates Alan Mullery and Terry Venables, then in charge of Brighton and Palace respectively, and an FA Cup first round tie in 1976 which needed a second replay - won by Palace following a disallowed Brighton penalty - sealed the discord between the two sets of fans.

The sides have only met six times in the past 10 years but Holloway says despite the importance to the fans, his side will be ready for the derby atmosphere.

"I've got no doubt our lads will be in the perfect frame of mind to rise to the challenge.

"It will be a challenge because Brighton are playing very well. I like the way they try and play and it should make for a good game of football."

Both sides are currently challenging for promotion to the Premier League, with Palace currently second in the table and Brighton on the verge of the play-off places.

"There will be lots of passes and exciting wing play. They've got Will Buckley while we've got Yannick Bolasie and Wilfried Zaha," Holloway continued.

"It will be tenacious in midfield and it will be about which defence can cope with the other's attacks best."