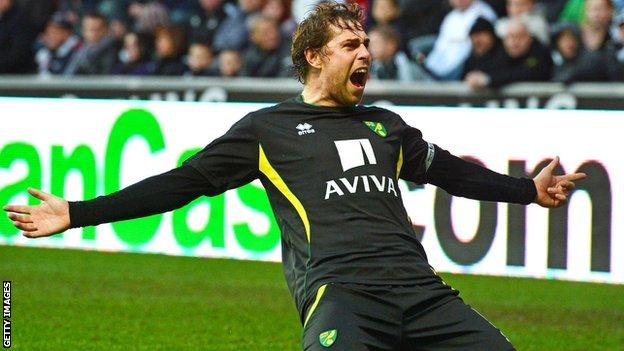 Norwich extended their unbeaten run in the Premier League to nine games despite a spirited Swansea fightback.

A first-half strike from Steven Whittaker and headers from Sebastien Bassong and captain Grant Holt gave the visitors the advantage.

A left-footed Robert Snodgrass free-kick made it four for the Canaries, before a late Michu consolation.

In chilly south Wales conditions the crowd at Liberty Stadium saw two sides brimming with confidence from the off.

Michael Laudrup's hosts entered into the fixture undefeated in their last six in the league and fresh from a 2-0 victory at Arsenal.

However, the visitors were in even better form - Norwich's eight games without a loss equalled their best run in the top flight back in October 1989.

That said, the Canaries had only scored five goals away from home all season before Saturday.

Both sides made two changes to their starting XI and Swansea recalled striker Danny Graham, who had scored six in his last four games against Norwich.

And it was the former Watford frontman who came closest for the Swans in the first half, a looping header cannoning off keeper Mark Bunn's crossbar after a De Guzman chip sent him clear inside the box.

In contrast, when Norwich created openings they converted them.

First right-back Whittaker surged forward, exchanged passes on the flank with Snodgrass, then cut inside. The Scotland international travelled unchallenged into the Swansea area before unleashing a fierce drive past Gerhard Tremmel at his near post.

The Norwich lead was doubled 25 minutes later, Bassong leaping and connecting well with a hanging Grant Holt cross to bury his header home.

And it was Holt himself who claimed the third. A foul on the right flank allowed Snodgrass to curl in a free-kick. The Norwich captain eluded marker Ki Sung-Yeung and powered a header past the exposed Tremmel.

However, the visitors' three-goal advantage did not last long into the second half, Laudrup's men forcing an early corner after good work by Chico Flores on the right.

Swansea's Spanish frontman Michu is the top scorer in the Premier League with 12 goals, and they have come from only 20 shots on target.

The corner itself posed little threat, but it was collected out on the left by 19-year-old Wales international Ben Davies. His pass back to the onrushing Michu was inch- perfect, the Spanish striker burying his shot past Bunn.

Nine minutes later Swansea had a second and were back in contention. Nathan Dyer beat Javier Garrido on the right, and his ball in was not cleared. It fell to De Guzman on the edge of the area who converted his crisp volley with aplomb.

The hosts had the ball in the back of the Norwich net a third time, substitute Itay Shechter converting after Bunn spilled the ball under pressure from Michu. However, despite the public address system kicking into action, referee Howard Webb had blown for a foul on Bunn and play resumed.

The momentum was with Swansea, but the atmosphere was sucked out of Liberty Stadium with 15 minutes remaining. Swans captain Ashley Williams upended Holt 25 yards out and was cautioned. Snodgrass then stepped up and curled a sublime effort over the wall and in.

But Laudrup's team continued to chase, and in stoppage time they came close to stealing a point.

First De Guzman whipped in a tremendous cross that Michu headed in at the far post for his 13th of the campaign. Then a ball over the top was flicked on by Shechter, forcing Bunn to tip over his crossbar. That proved the final chance in a pulsating game, a result which ended Swansea's six games unbeaten and pushed Norwich up to 11th in the table.

Swansea City manager Michael Laudrup: "In the first half we conceded three goals and it was not a very good performance. But the first half was as bad as the second was good. I think the players bounced back great. We scored two in 15 minutes and had a third one ruled out, which was a little harsh. But I don't think we deserved to win today after that first-half performance."

Chris Hughton, Norwich City boss: "It wasn't easy, even when we got those goals in the first-half. Swansea are a wonderful footballing side, and it's obvious why they've had such a good start. We didn't do ourselves any favours conceding in that second half, but we showed great character to come back at them. I thought it was a fair result today, on the balance of play. We deserved it. Has this been overdue? Perhaps. We've been working hard for it."