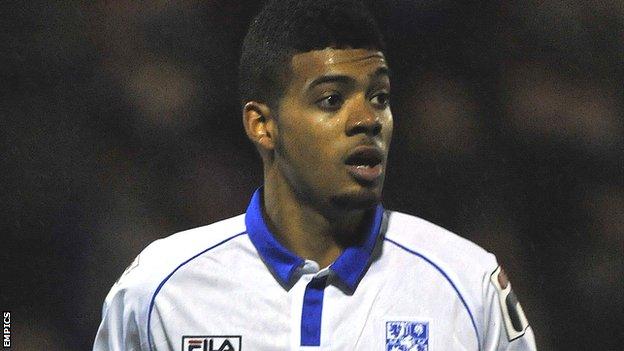 Centre-back Ash Taylor nodded the hosts in front from an Adam McGurk cross, but the visitors levelled when Gabor Gyepes headed in Brian Howard's free-kick.

Andy Robinson's drilled centre was converted by Michael O'Halloran to put the home side 2-1 up.

But Jervis, who played five times during a spell at Tranmere earlier this season, curled in a second equaliser.

The 21-year-old, who is netted less than a minute after Bolton loanee O'Halloran had restored Rovers' advantage.

Portsmouth have now gone nine games without a victory in all competitions, while Tranmere stay top of the table on goal difference, despite failing to win for the fourth league game in succession.

"I'm definitely frustrated. Having got the second goal, you just need to see the game out.

"We're throwing points away. We've got two tough away games to come and it feels like a defeat really."

"To twice go a goal down and to come back again shows that there's a spirit building.

"On the back of those seven defeats it's nice to know the lads have still got a lot of fight in them and haven't given up.

"It was a great save [by keeper Simon Eastwood] at the end. When you get to the end of a game people are tired but he kept us in the game in the last five minutes and gave us the opportunity to have a chance ourselves."