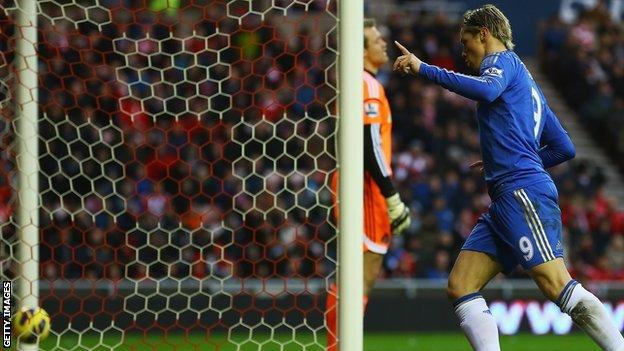 The Blues dominated early on and a classy Torres volley made it 1-0.

Torres back on track?

But the Spaniard has still scored 11 goals in 25 games for the Blues this season.

Sunderland responded but a rash tackle by Sebastian Larsson gifted Torres a second from the penalty spot and Juan Mata drove in a third after the break.

Adam Johnson's fine shot gave the hosts hope but Chelsea held on to give Rafael Benitez a first league win as boss.

It was the Spaniard's first Premier League victory in four attempts as interim manager but it increases the pressure on counterpart Martin O'Neill, whose side have won only two games in 23 league matches and have slipped to 18th place in the table following Southampton's win over Reading.

A dismal run of form had left a 10-point gap between Chelsea and leaders Manchester United at the start of the day.

Benitez had insisted the deficit at the top of the table was not insurmountable.

But with no wins in seven league games and an enforced break because of the World Club Cup in Japan, defeat against a hopelessly out-of-form Black Cats side would surely have ended their title chances.

That never looked likely as Chelsea established control from the outset.

Eden Hazard appeared unfortunate not to win a penalty when Larsson tugged him back as the Belgian raced through on goal and Mata and Torres both had decent openings.

But Torres soon steered the visitors ahead with a beautifully controlled volley from Hazard's cross after a flowing move.

Chelsea's rhythm was disrupted when holding midfielder Oriol Romeu was forced off after 20 minutes with what appeared to be a knee injury.

Chelsea made harder work of it than they would have liked in the end but Torres was brave to take the penalty.

Sunderland, after being outgunned in midfield to start with, made a game of it despite being 3-0 down. Johnson scored a good goal but they couldn't fight back.

And, having been completely outplayed, Sunderland suddenly upped the tempo.

They started to press further up the pitch, denying the visitors space in their own half and forcing mistakes.

O'Neill's side still struggled to create clear chances, but Stephane Sessegnon tested keeper Petr Cech with a swerving long-range effort and there were a couple of nervy moments in the Blues defence.

However, any fears of a repeat of last week's second-half capitulation against West Ham all but disappeared as Chelsea scored either side of the interval.

Larsson raced back and needlessly chopped down Ramires on the goal-line in first-half injury-time.

And Torres - having scored his first Premier League goal since 6 October - showed renewed confidence to assume spot-kick responsibilities and found the corner with his first penalty in English football.

Three minutes after the restart Mata had made it 3-0, calmly shooting into the far corner when after an instinctive first-time Torres strike crashed back off the bar after a Phil Bardsley mis-kick.

Johnson forced a fine save from Cech from a 25-yard free-kick, Connor Wickham - who started in place of the injured Steven Fletcher up front - went close with a low shot across goal and Craig Gardner struck the bar with a powerful free-kick.

But Sunderland were left to rue their defensive shortcomings and unable to prevent a 15th defeat in 16 games against Chelsea, who head off to Japan in a much better frame of mind after a turbulent few weeks.

The Blues, who begin their World Club Cup campaign on Thursday, will also have midfielder Frank Lampard fit and available after his late appearance as a substitute following seven weeks out with a calf injury.