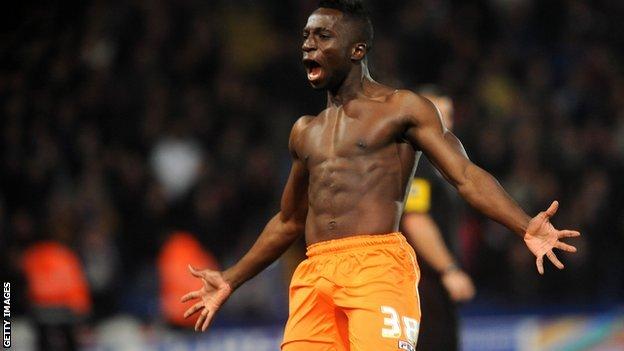 Striker Nathan Delfouneso headed in at the far post to put the visitors in front before Blackpool were punished for their profligacy.

Yannick Bolasie crossed for Owen Garvan to nod home and Glenn Murray also headed in to put Palace in the lead.

Palace looked set for a win but Dicko levelled from a drilled Wes Thomas cross after 89 minutes.

Holloway had nicknamed Dicko "super sub" in his spell in charge of the Seasiders and he was proved right, to his cost, as his side were left three points behind Championship leaders Cardiff.

Appleton had seen his side begin strongly and Craig Cathcart, Isaiah Osbourne and Thomas all went close before Thomas Ince set up Delfouneso for the opener.

Ince failed to take two chances which came his way and Blackpool were punished when Garvan scored, before also rattling the crossbar with a 25-yard free-kick.

Murray's 18th goal of the season put Palace ahead after 64 minutes but they could not hold on to their lead as Dicko earned his side a point.

Crystal Palace manager Ian Holloway: "They were delighted at the end but I didn't like the reaction of one of the men on their bench.

"One of the new fellas looked straight at me when they equalised. It's a war out there and I carried my shield very proud.

"It was not easy to play down the emotion, I was at Blackpool a long time and had great times, but you have to move on."

Blackpool manager Michael Appleton: "I'm sure some players get themselves up for different games, former managers or clubs, and I thought we dealt with them reasonably well.

"I would have been desperately disappointed not to take anything out of the game after having played so well in the first half.

"Just before we got an equaliser, you could see a bit of momentum building. And once we got that, I thought we could have gone on and got the winner."