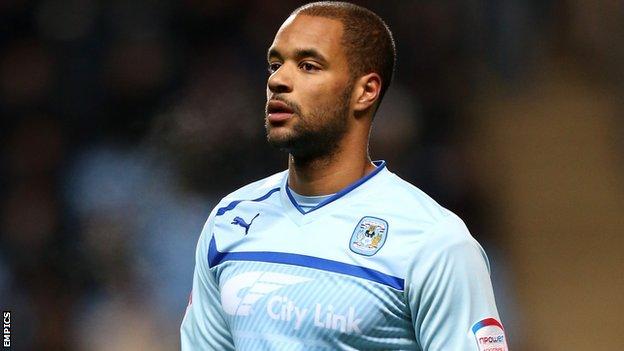 Blair Adams' 16th-minute own goal put the visitors ahead before goals from Carl Baker and two in as many minutes from Sky Blues top scorer David McGoldrick made it 3-1 at the break.

Baker got his second seven minutes from time, from just outside the box.

To add to their miserable afternoon, Walsall skipper Andy Butler was sent off nine minutes from time for a second yellow card.

Coventry have moved up to 15th in League One after stretching their unbeaten run to six games against a Walsall side who have not won in 15 - since beating Bournemouth on 29 September.

McGoldrick, League One's 13-goal top scorer, now has 15 for the season in all competitions.

His first on 39 minutes finished off a good move involving Baker and James Bailey, then, despite Walsall protests that he had fouled visiting defender Richard Taundry, he chested down Baker's cross to fire home from six yards.

Walsall had taken a 14th-minute lead when full-back Blair turned Jamie Paterson's cross into his own net from 10 yards.

But Baker equalised with the first of his brace on 29 minutes when he pounced on a loose ball in the box to beat Aaron McCarey at his near post.

Coventry full-back Christie put the result beyond doubt on 62 minutes, evading the linesman's flag to latch onto Baker's pass before cutting inside to fire through a sea of bodies into the corner.

Baker, who was involved in all five Coventry goals, made it five on 84 minutes when he fired in a left-footed shot into the bottom corner from 20 yards.

"I'm proud of them. It was a big three points and keeps that momentum going and keep us climbing the table.

"For the first 20 minutes we weren't at the races. We didn't take any of our openings, and ended up giving them a goal start with an own goal. That kicked us into life.

"I could tell by looking into Dave McGoldrick's eyes before the game that he was ready for goals and was hungry. He worked hard, got into good positions, led the line and gave us opportunities to get up the pitch."

"I felt the goals we conceded were vey poor. We've got to be better defensively. And our performance for the final 70 minutes was a talking point.

"But the referee's performance was another talking point as two of their goals should not have counted.

"I've not had this referee for five years since I was assistant manager at Leyton Orient. I remember Martin Ling giving him 0 out of 100 . . . and he won't be getting many more from me."