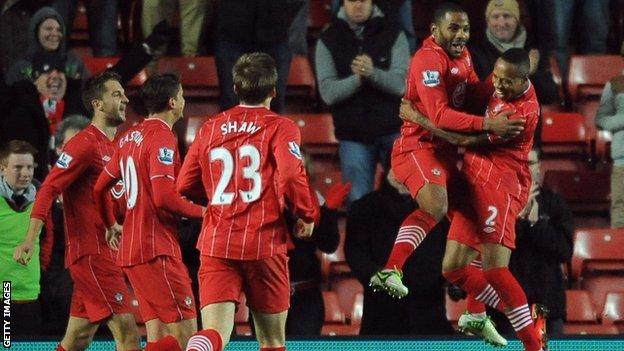 Jason Puncheon's second-half goal earned Southampton a vital victory against Reading, lifting the Saints out of the bottom three and leaving the Royals second bottom and six points from safety.

Saints dominated the match and had chances throughout, but Puncheon's shot, which found the net via the far post, proved decisive.

Reading struggled to make any sort of impact on the game with Hal Robson-Kanu's close-range header off the post their best chance.

Jay Tabb also had an effort well saved by Saints keeper Kelvin Davis, while Maya Yoshida's flick-on from Puncheon's corner was cleared off the line by Reading defender Shaun Cummings.

This fixture last season was a pivotal game in the race for the Championship title, Reading winning that day and going on to top the table ahead of Saints.

But despite opening with four defeats, Southampton have made the better start to the Premier League campaign.

Their home form has been the basis for that success with two wins and three draws in their last six league games at St Mary's, while Reading headed into the match without an away victory this season.

Saints dominated proceedings early on with the movement of their front four causing the visitors' defence problems. Jay Rodriguez and Morgan Schneiderlin both went close for the hosts.

Tightening up at the back

Southampton's clean sheet was only their second of the season in the Premier League, although the other one came only two weeks ago when they beat Newcastle 2-0.

However, the Saints have still conceded the most goals in the division.

Reading keeper Adam Federici was soon called into action, comfortably saving Adam Lallana's half volley and palming away Rickie Lambert's curling effort from the edge of the area at full stretch.

At the other end, Tabb had Reading's first chance with his run and shot kept out by Davis, and the midfielder then losing his footing under pressure from Jack Cork when going for the rebound.

Saints did have the ball in the net before the break but Puncheon's header was ruled out for an earlier foul by Yoshida on Federici, although replays suggested it was a harsh decision.

The hosts then lost Lallana, who was forced off with a knee injury after an innocuous looking challenge from Tabb, although Saints did have the benefit of being able to bring on £12m forward Gaston Ramirez.

But, on the stroke of half-time, Reading almost took the lead, Robson-Kanu heading against the post from six yards out after Sean Morrison nodded the ball back across goal.

Roared on by vociferous home support at St Mary's, Saints started the second half impressively with Puncheon's low strike from the edge of the area well saved by Federici.

Royals boss Brian McDermott looked an increasingly frustrated figure on the sidelines as his side struggled to assert themselves and Puncheon duly gave Saints the lead with a fine finish across Federici, which flew in off the post.

Jobi McAnuff then curled a shot wide of the angle for Reading, who brought on defender Alex Pearce for the injured Morrison while striker Noel Hunt replaced Tabb.

But a tame Adam Le Fondre header that bobbled wide was their only further chance of note as Nigel Adkins's side held on.

"I thought we dominated the game and we were worthy winners. The crowd got behind the players, we played with a good tempo and it was a good 1-0 victory.

"The goal was excellent and one from the training ground where we get the full-backs forward.

"Adam [Lallana] has a knee injury. He has a brace on, as we always do in that situation, and he is on crutches but we will have to assess it in the next 24 hours."

"We're obviously disappointed - we all are after a game like that. We know the league we're in; we've got to keep our heads down, dig in and get on with it.

"I feel sorry for our fans. They've come up to Southampton and we haven't got a result. We play for them and they'll be as frustrated as we are. Everyone in the dressing room is bitterly disappointed.

"When you don't win you get asked questions and I understand that. I'm as gutted as anyone today. We all do our best every single day. I know what they players are giving us, we pick ourselves up quickly ahead of Tuesday.

"We're used to winning, now we're not winning and nobody enjoys that. We'll keep going because things change."