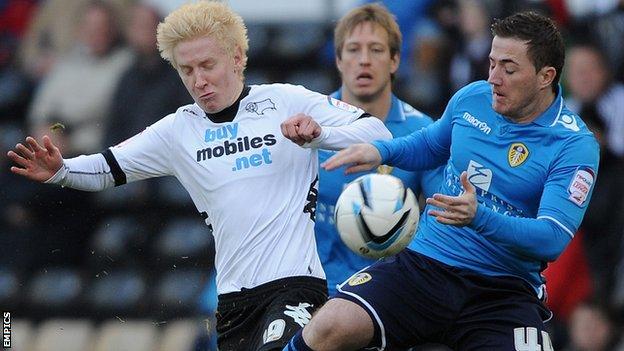 Derby gained only their second victory in six games as they ended Leeds' three-match winning run.

Conor Sammon put the hosts ahead when he shot past United goalkeeper Paddy Kenny following an excellent run from 17-year-old midfielder Will Hughes.

Leeds' Paul Green equalised against his old club, flicking into the net after Luciano Becchio's knock-down.

Hughes became the second youngest player to represent England Under-21s when he played against Northern Ireland last month and was at the heart of Derby's best moves.

The Rams went ahead when Theo Robinson gave the ball to Hughes with a quickly-taken free-kick and Hughes ran at the Leeds defence before finding Sammon.

Derby have now won their last eight games against Leeds in all competitions.

Leeds last took a point off the Rams in the Championship in February 2006, when they achieved a goalless draw.

Sammon turned left-back Lee Peltier to create some space for the shot and his poorly-struck effort still found its way into the net as the goalkeeper was wrong-footed.

Derby had chances to double their lead but Kenny denied Robinson before a heavy first touch from Sammon enabled Tom Lees to make a last-ditch challenge after another direct run from Hughes.

But Leeds, aiming to collect four successive league wins for the first time since November 2009, equalised when Sam Byram hit a deep cross into the box and Becchio's superb knock-down found Green unmarked.

Green, who played for Derby for four seasons before leaving Pride Park at the end of 2011-12, guided the ball with the outside of his foot past the advancing Adam Legzdins.

The hosts started the second half brightly as Sammon dragged a shot wide, Keogh headed over and Hughes was denied by Kenny after dribbling past three opponents.

But Derby scored their second when Becchio's weak header fell to Keogh and his shot was steered in by team-mate Buxton.

Leeds nearly grabbed a second equaliser but Lees hit the inside of the post from a cross from substitute El-Hadji Diouf, before the Senegal international also fired wide late on.

Substitute Davies sealed the victory for the Rams, curling home an effort in injury-time from the edge of the penalty area.

"I think a few of the big boys are watching Will [Hughes] which is a great compliment to him and the academy lads, but if they are we will do everything we can to hang on to him.

"Early on, I thought Leeds stopped him playing just through good closing down so we couldn't quite get him on the ball. But once the game opened up he was outstanding again.

"We were on the front foot early on and it was a very, very solid home performance. Apart from a small period in the game we played some excellent stuff today and the character and honesty of the players again shone through."

"The second goal was always going to be the winner today and we couldn't quite manage it."