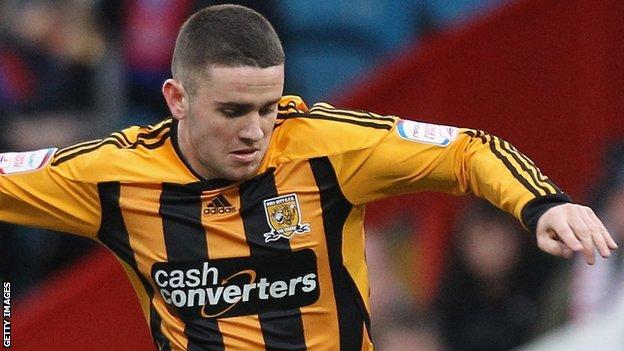 Hull won at Watford for a third straight away victory that moves them up to fourth in the Championship.

Sunderland loanee David Meyler headed in on the rebound to give the Tigers the lead just before half-time.

Substitute Almen Abdi came close to equalising for the hosts when he hit the post, before Robbie Brady's free-kick doubled Hull's lead.

Troy Deeney struck for the Hornets late on but it was not enough to keep their seven-match unbeaten run going.

Watford had won five of those seven games but could not keep up that recent form as the visitors took control of the first half.

Robert Koren saw his long-distance shot held by Manuel Almunia before Meyler nodded home after Corry Evans's drive cam back off the bar.

The home side improved after the break and David Stockdale brilliantly saved Mark Yeates's free-kick before Abdi struck the woodwork.

But it was Hull who struck next, as Robbie Brady smashed home a 25-yard free-kick after Fitz Hall brought down Meyler.

Deeney ensured a nervy finish as he converted Abdi's through-ball on the verge of full-time, but Steve Bruce's side held on for their sixth victory in nine.

"The second half was better, the approach was better, we created more chances, we could even have drawn the game in the end but you can't give away 45 minutes like we did.

"We took a defender off, we put Marco [Cassetti] in the middle and Ikechi [Anya] has given something extra going forward, he was very good, and when [Almen] Abdi came on he's given us something very good in the middle.

"I don't see this as a step back, it's just part of the journey, you can't expect with our team to win all the games. Sometimes you lose and you learn something from it, as I hope everybody will, and with more energy we go forward again."

"Watford in the second half were better but the first half I can't really remember my goalkeeper having a touch of the ball and we've had two chances in the first three minutes which we've missed.

"But we knew Gianfranco's [Zola] team would be different in the second half, they're on a great run of form but I think we were worthy winners. We could have been and should have been out of sight.