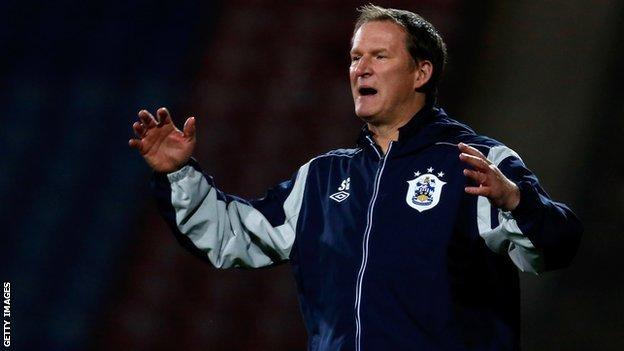 James Vaughan struck late on for Huddersfield to salvage a draw against Bolton in the Championship.

The Terriers went ahead when Anthony Gerrard's goal-bound header went in off centre-back Zat Knight and Lee Novak struck the bar soon after.

But the visitors equalised through Mark Davies's neat finish and Chris Eagles had his penalty saved by Alex Smithies.

Eagles made up for it with a 12-yard strike but Vaughan scored from close range with three minutes remaining.

Simon Grayson's men have now conceded nine goals in their last three games, but it will be opposition manager Dougie Freedman who will be the more concerned manager, having now failed to win six of their last seven league games.

And the Trotters have squandered 21 points from winning positions - the most in the division.

The hosts started the match on top with Adam Clayton stinging the palms of goalkeeper Adam Bogdan early on.

Bolton danger man Eagles responded soon after, forcing a save from Smithies.

Huddersfield went ahead as Oliver Norwood's corner was met by Gerrard, whose header ended up in the net off the unfortunate Knight.

They could have doubled their lead when Novak smashed against the bar, instead the away side levelled in the second half through Davies, who tucked home after an Eagles pass.

The former Manchester United man had a glorious chance with a spot-kick, after Paul Dixon fouled Sam Ricketts in box, but Smithies tipped his penalty onto the post.

Eagles redeemed himself shortly after by scoring from 12 yards out, but Vaughan's effort ensured Huddersfield avoided a third straight defeat.

"If you paid money to come and watch this game I don't think you were short changed. The game swung backwards and forwards and I have kicked every ball and gone through every emotion.

"We made some mistakes but we could have nicked it at the end.

"Bolton are a top, top team at the wrong end of the division. They have Premier League experience and we showed we can compete."

"I am very proud of that performance. I am excited about what we have to work with here.

"I understand people will be disappointed at some of the results but from a coach's point of view we keep putting in performances. Sometimes you don't get what you deserve but you just stick to your principles.

"We play on the front foot and we keep going. What we need to do now is change these draws into wins."