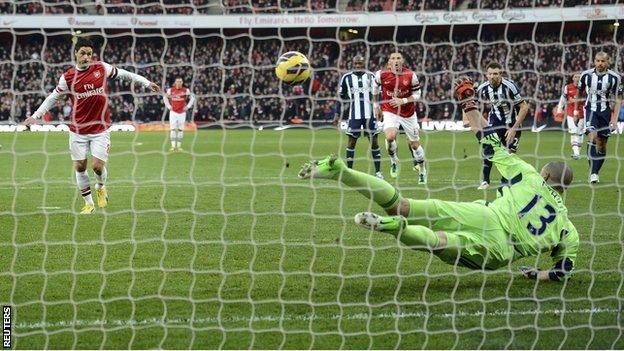 Mikel Arteta arrested Arsenal's recent slide as he scored two penalties to steer his side to a win over West Brom.

The midfielder's first spot-kick came after Steven Reid was controversially adjudged to have fouled Santi Cazorla.

The visitors thought they should have had a penalty for a Per Mertesacker handball but they struggled to create any real chances.

Alex Oxlade-Chamberlain was fouled by Chris Brunt for Arteta's second and a first Arsenal win in four league games.

Lukas Podolski should have put a more convincing gloss on the win only to scuff a late shot horribly high from six yards.

For West Brom, it was a third straight top flight-defeat but they will no doubt point to the decisions of referee Mike Jones for playing a part in their downfall.

Victory will come as a relief for the Gunners as they battled to a result that moves them up to sixth from 10th in the Premier League.

Arsenal were watched by former striker Thierry Henry amid talk he could return to the club on a temporary basis from MLS club New York Red Bulls, but he will have seen a side a shadow of the title-winning ones he spearheaded.

"The referee will be questioned over two important decisions leading to the penalties. But it is three defeats in a row for West Brom, while Arsenal are back on track."

The Gunners delivered an early statement of intent when Gervinho slid a shot narrowly wide but, despite dominating possession, Arsenal lacked the speed of thought and pass to break down a Baggies side waiting for the opportunity to pounce on the counter-attack.

The visitors' strategy almost paid off when Brunt bent a shot just wide before referee Jones awarded the home side a penalty after deciding Reid had tripped Cazorla.

The aggrieved Albion players argued that there had not been any contact but had to watch on as Arteta, who missed a penalty against Fulham last month, put the spot-kick down the middle to beat keeper Boaz Myhill.

The visitors almost let in a second when Gervinho pulled the ball back for a lunging Jack Wilshere to poke an effort wide.

Albion again felt hard done by when a cross into the area struck the arm of Gunners centre-back Mertesacker only for Jones to reject their penalty appeals and give a free-kick against them.

At the other end, Arsenal were only denied a second when keeper Myhill palmed away a Gervinho shot and the same player should have done better from close range after being found by fellow forward Olivier Giroud's chipped pass.

The Gunners needed another spot-kick to give them some breathing space, with Brunt penalised for a foul on Oxlade-Chamberlain.

While there was little complaint at the award of the penalty, the Baggies believed Oxlade-Chamberlain should have been penalised for a shove on Goran Popov in the build-up.

The Baggies threw on Romelu Lukaku and Markus Rosenborg to join Shane Long in attack and, while the former headed wide, they rarely looked like mounting a comeback as Arsenal earned a much-needed win.

"I am sorry if it was not a penalty, but I have spoken to Santi and he said he was touched, lost his balance. Has he made a bit more of it? I don't know.

"Overall we played well. We were maybe a bit lucky on the first penalty, but we created chances and kept a clean sheet.

"We have shown a great spirit, which many people questioned after our last game, so we did our job very well."

"There was zero contact [for the first penalty], it wasn't even close. I am not sure what the referee saw.

"It was a bad decision for us and obviously changed the shape of the afternoon. It could have been a nervous afternoon for Arsenal, at 0-0 they hadn't created too much.

"We knew the longer the game went the more pressure would come on Arsenal and then we would have a chance. That decision changed it."

He added: "I don't want a witch hunt on referees, in this country we have fantastic referees and a fantastic group that work hard to make the game the game it is.

"We have to try to work as hard as we can with the referees, in this game unfortunately it was the poorest of a really good group."