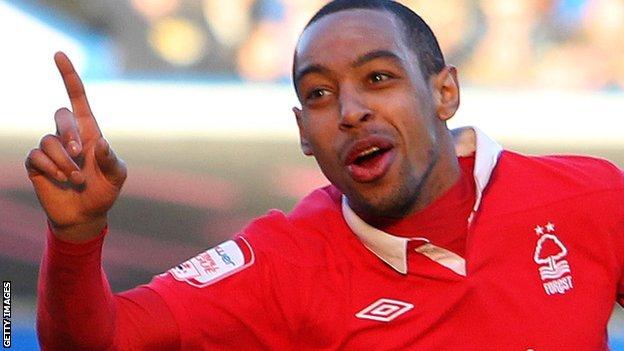 The Reds went into the game following consecutive defeats to Ipswich and Hull, but Blackstock set Forest on their way to victory with a bullet header on the hour mark.

His strike partner Billy Sharp secured all three points, slotting home after being put through on goal by Andy Reid.

The result left Sean O'Driscoll's side just one point from the play-off spots.

Burnley made a bright start through Charlie Austin, but he showed no sign of the composure that has seen him score than 21 times so far this season, and his effort went high over the bar.

Forest's first real chance came just after the half hour mark when Blackstock, who had last scored at the City Ground in a 2-0 win over Portsmouth at the end of April, thundered a header straight into the arms of goalkeeper Lee Grant.

After the break, Lewis McGugan volleyed narrowly over from Reid's cross early in the second half before Blackstock broke the deadlock.

The striker had a lot of work to do with Reid's deep cross but he leapt brilliantly to guide his header over Grant.

Forest were lucky to keep hold of their advantage when Clarets substitute Sam Vokes headed inches wide as Lee Camp and his defenders stood statuesque.

But Sharp sealed the victory, slipping behind the Burnley defence and finishing confidently when one-on-one with Grant.

"It was crucial for us to get the first goal because games in the Championship are so tight but we needed that breakthrough after losing our last two games. It settled us down, we were able to relax a little bit and never looked in any danger of from then on in.

"Andy [Reid] has been terrific for us all season and he's obviously had a big part to play in both goals. In the position he plays he is difficult to pin down. He doesn't play wide or in central midfield and he makes life difficult for anyone trying to pick him up.

"Defenders don't want to go out and mark him and leave space behind and he's been causing those kind of problems for a long time."

"There was nothing in the game until the first goal and it should not have been allowed. I've seen the incident again and it was clearly a foul by Dexter Blackstock on Jason Shackell.

"It's impossible to leap that high and get that leverage without using somebody else, if I can see it 70 yards away I don't see how an official can't spot it. It changed the whole game because the crowd were then up and there was a bit of belief back in the team.

"Before that we had done pretty well. In fact for the last 25 minutes of the first half we looked the more likely and arguably should have come in 1-0 ahead. It was a nearly day for us but there were still some good things in our play - and some not so good."