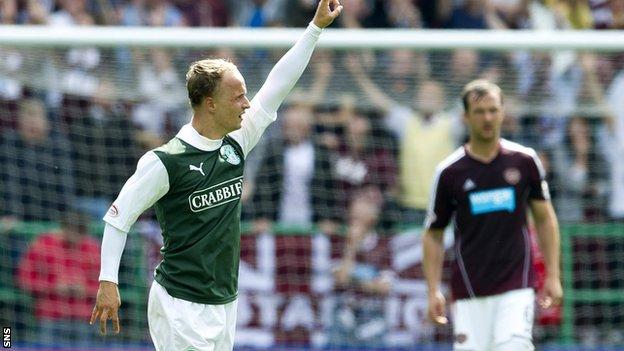 Manager John McGlynn is confident Hearts can stretch their unbeaten sequence against Hibernian to 13 games.

Hearts have not lost an Edinburgh derby since May 2009 in a run that includes last season's Scottish Cup final win.

"We are the holders and because of that we want to keep a hold of it," said McGlynn ahead of Sunday's fourth round tie at Easter Road.

"That gives us extra motivation, not necessarily pressure. I think the pressure is on Hibs."

Hibs last lifted the Scottish Cup in 1902, while Hearts have been victorious in 1998, 2006 and again this year thanks to a crushing 5-1 success.

However, Hibs have recovered well since that humiliating Hampden reverse and now sit second in the Scottish Premier League table, with Hearts, dogged by financial problems, in ninth.

McGlynn, though, preferred to focus on Hearts' dominance in the capital clash and the clubs' differing fortunes in the cup.

"It's a good few years now since they won it and we've won it twice recently, if memory serves me right, and three times in just slightly longer," he added.

"It's a derby game. In any season, in any situation, it's a massive game.

Four of Hearts' starting XI from 19 May have left Tynecastle as part of a cost-cutting exercise, while Hibs are also much-changed and likely to start with just four players who featured at Hampden.

"You have to move on and you have to play this game on its merits," added McGlynn, who was appointed successor to cup-winning boss Paulo Sergio in the summer.

"It's a different scenario altogether. We have to make sure we're not caught up in the past, we have to learn from the past, but we have to play this particular game and not get caught up too much in the occasion."

Hibernian manager Pat Fenlon suffered the further ignominy of being sent off during last season's final for aiming a frustrated gesture at Hearts fans who were taunting him.

But the Irishman insists he has forgotten all about

"It's not in my mind," explained Fenlon. "There's been a massive changeover, probably with both clubs.

"Our goal is to get through to the next round of the cup. We can't do anything about what's gone by over a period of time but we can affect what's coming ahead.

"The important thing is to try to affect the game on Sunday in a positive manner.

"They've been in the ascendancy for the last three or four seasons. There's reasons for that.

"Every dog has their day, so things will change. I'm sure we've had a period of time where we were in the ascendancy.

"You just have to take that at times and try to improve it. That's what we're trying to do this weekend, trying to improve our record against them."