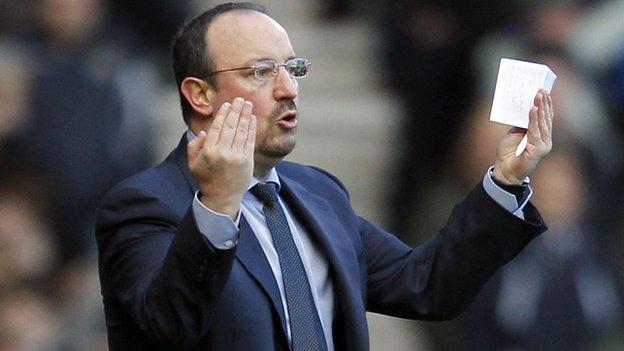 Chelsea manager Rafael Benitez refused to be drawn on discontent among the club's supporters, insisting winning games will prove he is the right man for the job.

Chants of "sacked in the morning" and "one Di Matteo" came from sections of the away support.

"We have to improve on the pitch and the fans will be happy," Benitez said.

"We know we have to win games; to change things around. I will not think about other things. I will think about my next game, in the Champions League, we will try to win and see what happens."

Benitez's side dominated the first half, but with Fernando Torres, Juan Mata and Victor Moses unable to convert a series of chances, Chelsea allowed West Ham back into the game.

It was the first time Chelsea had lost to West Ham since 2003 and Benitez has now drawn two and lost one of his first three matches in charge.

The club's failure to win any of their past seven Premier League matches is their worst run of form since February 1995.

But Benitez insists he can turn things around. He said: "My concern is to improve the team and to analyse what is going wrong on the pitch.

"If we improve and start winning games, it will be easy to turn things around.

"This is a top side. It will take some time."

When asked if the fans' anger was affecting the players, Benitez added: "We have experienced players who have been playing at this level for a while. They know they have to manage and cope with this."

But while Benitez believes the supporters can be won over, his West Ham counterpart Sam Allardyce said he believes a manager will always struggle when the fans are against them.

"You can't do it if the fans aren't behind you," he said. "The only way to get the fans behind you is to win.

"Chelsea really should have finished us off but they didn't. Because of that they paid the price."