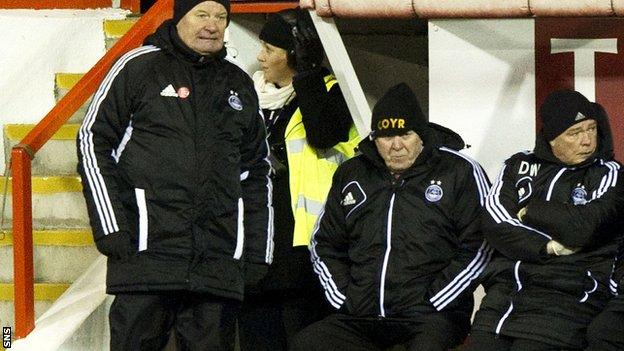 Aberdeen manager Craig Brown will rely on both away form and support for the Scottish Cup replay with Motherwell.

His side came back to seal a 1-1 draw at Pittodrie on Saturday and they will meet again on Tuesday 11 December.

"We won comfortably in Paisley against St Mirren and we won at Easter Road against Hibs. So there's nothing to worry us about playing away from home."

Brown felt his team were in the ascendency for much of Saturday's match and believed Aberdeen deserved at least a draw.

Jamie Murphy put the vistors ahead with 10 minutes remaining before Niall McGinn notched his ninth goal of the season in the 90th minute.

The two sides met in the Scottish Cup sixth round at Fir Park last season, where the Dons won 2-1.

"One thing about Aberdeen is we have tremendous away support so I'm hoping they come on a Tuesday night," said Brown.

"If they do we'll get the terrific support they normally give and that'll help us.

"But it's on the pitch that the game is won or lost and I think we'll have one or two of our eight injured players back for that fixture."