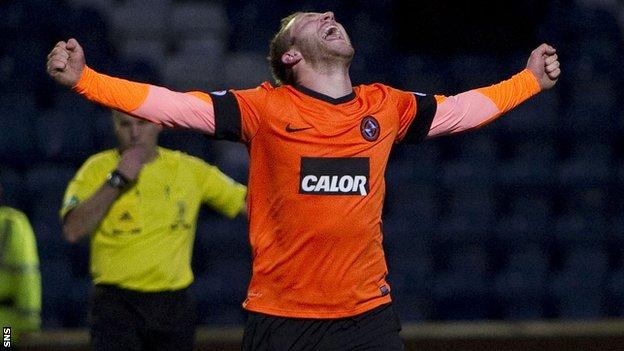 Dundee United boss Peter Houston praised his side for a professional performance as they swept past Stranraer in the Scottish Cup.

Johnny Russell knocked in a hat-trick and Jon Daly scored twice in a 5-0 win at Stair Park.

"We could have scored a lot more," said a delighted Houston.

"Their defenders did as well as they could but they are playing against Russell who is sharp and Daly who is experienced and a handful."

Houston added: "Their goalkeeper [David Mitchell] won the sponsors' man of the match and the boy did quite well."

Russell's hat-trick took him to 11 goals for the season as United look to recapture the trophy they won in 2010.

And Houston is keen to keep the striker at Tannadice for another year "at least".

"There are bits of his game when he plays against better opposition that he is still to learn," explained the manager.

"I look at some players who go down and don't play - in fact we've got about 10 ex-players that are not playing just now since the cup final."

Houston had stressed to his players beforehand he did not want a cup shock.

"I thought we started in the right manner," he continued.

"None more so than Willo Flood getting a grip of the game along with John Rankin in the middle of the park.

"Then, Johnny Russell is a talent and you saw that again.

"He is sharp round about the box and it is five goals for the strikers, which is pleasing."

Stranraer manager Stevie Aitken was left to reflect on the gulf in class between the two sides.

He said: "To be fair to Dundee United, they came down with a great attitude.

"Sometimes it is difficult for big teams to come to a place like this and maybe they do not show the right attitude but fair play to them.

"They made it difficult, they made it hard, which was always going to be the case but my players gave everything."