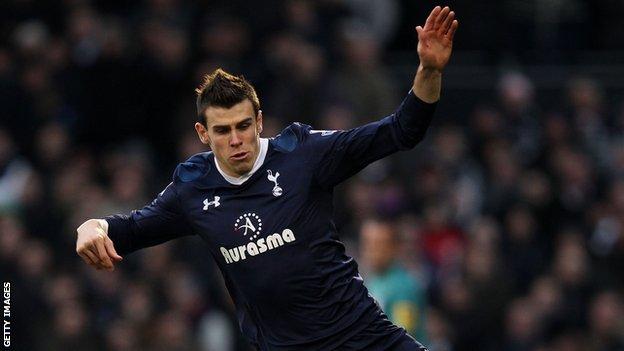 Gareth Bale is expected to be out for up to two weeks after limping off during Tottenham's 3-0 win at Fulham.

The winger was booked for diving for the second game in succession before going off with a hamstring problem.

"With muscle injuries it's very difficult, but it might keep him out for one to two weeks," said Villas-Boas.

Gareth Bale has been booked seven times in 24 appearances this season - three times in the Premier League, twice in the Europa League, once in the Capital One Cup and once in a World Cup qualifier

He could also sit out the game at Everton on 9 December after falling awkwardly following a shot at goal.

It capped a frustrating day for the 23-year-old, who had earlier been cautioned by referee Chris Foy for diving during a challenge with Fulham midfielder Steve Sidwell.

But Villas-Boas defended his player after replays suggested there was contact between the two players.

"Gareth is so fast so it is very difficult [for referees] to judge situations," Villas-Boas said.

"He has suffered big, big injuries to his ankles before and sometimes he wants to protect himself a little bit.

"He might put his body in situations that the referee thinks that he is diving and he is suffering for it in these last two games.

"He is now very near suspension for two unfair yellow cards and I think you gain a reputation for being a diver unfairly sometimes. This player has suffered a lot in his career.

"I'm not being biased but I think it was a bit harsh to book him," said the England international.

"When I spoke to him he just said that he was trying to get out of the way."

Michael Dawson also limped off at Craven Cottage with a hamstring injury, but Villas-Boas said the defender could be fit for the game at Everton.