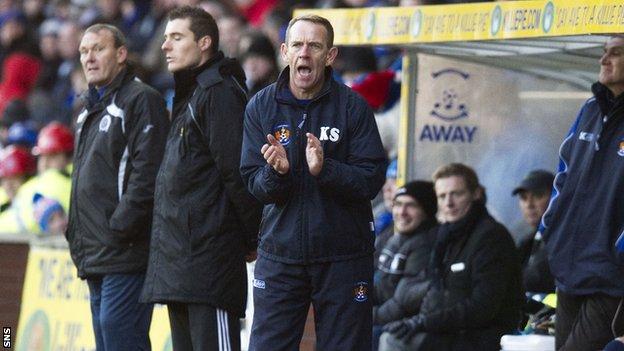 Kilmarnock manager Kenny Shiels has had another pop at referees after Scottish Cup opponents Queen of the South suffered an early red card.

"The Football Association must have changed the rules on tackling and I am trying to figure out what they are," said Shiels after his side's 2-1 win.

It is a hard job for referees, but it just looked like a strong tackle to me

"I couldn't see anything wrong with the tackle and I would be very disappointed if I was with Queen of the South."

Shiels is already facing two separate notices of complaint from the Scottish FA - one over criticism of referee Euan Norris after a match against Inverness Caley Thistle and the other for being sent to the stand last weekend.

That second charge came after he protested the red card shown to Manuel Pascali against St Johnstone and he saw them parallels with that incident at Rugby Park.

"It made it more difficult for us as it gave us more space and time on the ball, almost a reversal of last week, when Pascal Manuel was sent off for a similar kind of challenge," said the Kilmarnock manager.

The Scottish Premier League side struggled to subdue the Second Division leaders despite McKenna's tackle on Borja coming after only 90 seconds.

"The boys kept the ball well, but we had a lack of penetration as we had too many options," said Shiels.

"I am delighted though to get through and thought it was well deserved."

Kilmarnock beat Queens 5-0 last September, when the Dumfries side also suffered an early red card, before going on to lift the Scottish Communities League Cup.

"We started last season's League Cup run with a victory over Queens, so who knows where we can go from here?" added Shiels.

"It was very frustrating," said Johnston. "It is a hard job for referees, but it just looked like a strong tackle to me.

"I didn't think it was a two-footed tackle and he has won the ball with one foot and maybe caught the player with the other.

"Stephen is disappointed. He doesn't think it's a sending off, which you would expect.

"To play against a top SPL side like Kilmarnock, they showed they can play at the highest level."