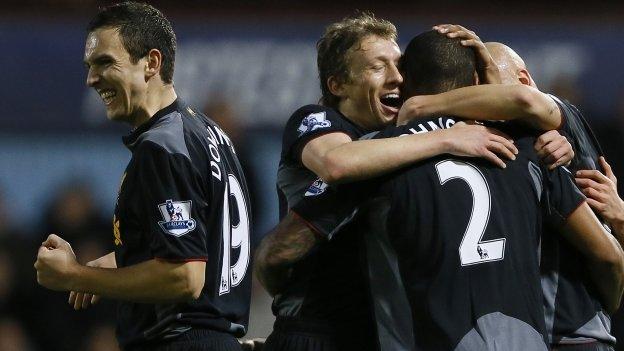 Liverpool scored two goals in three second-half minutes as they fought back from 2-1 down to beat West Ham thanks to a late James Collins own goal.

The Reds took an early lead through a spectacular Glen Johnson strike.

Mark Noble equalised from the spot after Joe Allen handled and Steven Gerrard headed into his own net to put the Hammers ahead at half-time.

But Joe Cole made it 2-2 with an angled drive before Jordan Henderson's cross span in off Collins at the near post.

Eight days ago, West Ham turned round a half-time deficit to beat Chelsea but this time it was Sam Allardyce's side who were on the wrong end of a stirring second-half comeback.

Following last weekend's win over Southampton, Liverpool have now won back-to-back Premier League games for the first time in a year, when Kenny Dalglish was in charge and the Reds beat QPR 1-0 on 10 December and Aston Villa 2-0 on 18 December.

This was the first time in nine attempts this season that Liverpool have won a league game immediately after a Europa League tie.

But it was an especially unlikely Reds recovery - not only had they toiled in attack just before their late burst of goals, they nicked the points despite being without the suspended Luis Suarez, their only fit striker.

The absence of Suarez did not seem to matter when Johnson put Liverpool ahead in spectacular style after 11 minutes.

Gerrard spread the ball to Johnson on the right, who cut inside before turning back on to his right foot and rifling a ferocious drive beyond Jussi Jaaskelainen and into the top corner.

That meant Johnson has now scored in his last three league games against his former club, and he appeared keen add to that tally whenever he picked up the ball.

Another one of his raids down the same flank saw him leave Matt Jarvis in his wake before teeing up Raheem Sterling who screwed a shot wide.

Jarvis was clearly struggling to fulfil his defensive duties but he fared much better when his side came forward.

From one of his crosses, Mohamed Diame had a shot deflected wide off his own team-mate Carlton Cole, and from another, Daniel Agger had to stretch to stop Cole from turning home.

By now, it was Liverpool under pressure but their resistance was ended in controversial circumstances after 35 minutes.

Referee Lee Probert pointed to the spot and Noble stepped up to slot his penalty into the bottom corner beyond Pepe Reina's dive.

Probert did not endear himself any further to the travelling fans when he chose only to caution Matt Taylor for a high and wild challenge on Sterling soon afterwards.

And things got even worse for the visitors when Gerrard headed a Jarvis cross into his own net just before the break.

There seemed no chance of any sort of turnaround as West Ham continued to press in the second half and Liverpool's passing game deserted them when they found themselves near the home side's penalty area.

Shelvey, who was having a frustrating time as Suarez's replacement in the Reds' attack, saw a deflected shot tipped over and steered a header wide.

But, just as against the Blues last weekend, Diame's participation was to prove decisive. Against Chelsea his introduction off the bench changed the game - this time a hamstring injury that forced him off did likewise.

Liverpool began to find a foothold in midfield and drew level thanks to another Hammers old boy - Joe Cole providing a precise finish from Sterling's slipped pass.

Three minutes later, Collins lunged in to beat Jonjo Shelvey to a low front-post cross from Jordan Henderson but the ball looped off his leg and over Jaaskelainen into the net.

From looking comfortable, West Ham were left chasing the game and, despite them pumping a series of balls into Reina's area, they were unable to rescue a point.

West Ham manager Sam Allardyce: "We were never in control of the game completely especially against a side like Liverpool, we were not going to dominate for the whole game.

"We gave everything we could. We can't continue to play and dominate teams we play, when we did today we got ourselves in the lead.

"We just got promoted, we are in a good run of form and there are expectations from fans "

Liverpool boss Brendan Rodgers on Jonjo Shelvey's role as stand-in striker: "In this country it is always a very traditional target man, a clear number nine.

"Give credit to Carlton Cole today, I know him from my time at Chelsea, he is a real handful and was outstanding today.

"But you see young Jonjo at 20 years of age playing the number nine role in a different way - dropping into midfield and combining with the midfield players to make the fourth man, being a threat when he is in around the box, showing great feet and I thought he was outstanding today the kid."