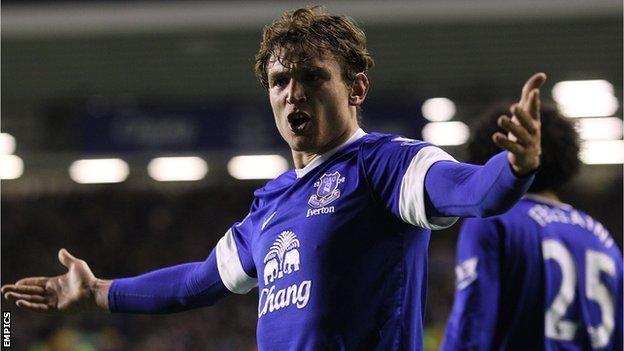 Two goals in stoppage time produced a dramatic late turnaround at Goodison Park as Everton beat Tottenham to move into fourth spot in the Premier League.

Spurs appeared to be on their way to victory courtesy of Clint Dempsey's deflected 76th-minute strike.

Gylfi Sigurdsson then hit the Toffees crossbar with a shot before Steven Pienaar header in against his former club to equalise after 90 minutes.

Nikica Jelavic then turned in a close-range shot for Everton's winner.

Spurs, without the buccaneering Gareth Bale through injury, thought they had produced a classic away performance, having soaked up the home side's pressure before taking the lead through one of their rare forays forward.

But Everton had a sting in their tail and extended their unbeaten run at Goodison Park to 12 games with a late rally which saw them leapfrog their opponents into the Champions League places on goal difference.

Toffees manager David Moyes was favourite to take over at Tottenham at one point during the summer prior to Andre Villas-Boas entering the fray and taking over as boss of the White Hart Lane outfit.

The pair shared a hug before the game but, if Moyes had any point to make to the London club's hierarchy, his side certainly began with the intent and industry to try to make it for him.

"David Moyes's Everton take all three points and go above Spurs and into the top four after a late turnaround. Andre-Villas Boas's team took the lead and then two dramatic late goals have won it for Everton."

Home midfielder Leon Osman had an early shot blocked after Pienaar, who returned to Goodison Park last January after a move to Spurs did not work out, cushioned a header into his path.

The visitors settled but, although Everton were looking the most dangerous, a combination of last-ditch defending, a smart save from keeper Hugo Lloris and lack of cutting edge in the final third held the home side at bay.

Lloris quickly came out of his goal to palm the ball away from the feet of Jelavic when the striker was put through on goal.

Spurs defender William Gallas also crucially intercepted a Kevin Mirallas cross in front of a waiting Jelavic, while Seamus Coleman sent an angled effort into the side-netting before Osman sent a shot across goal.

Everton also had two handball shouts against Dempsey and Gallas but neither were conclusive enough for referee Kevin Friend to award a penalty.

Spurs usually have a stylish swagger to their play but they were showing they could also put in a workmanlike performance as they frustrated their hosts.

Toffees midfielder Steven Naismith came on after the break and he immediately had a chance. Leighton Baines fired in a shot at goal after his free-kick had come back off the Tottenham wall but Naismith side-footed the off-target effort wide from eight yards.

Everton were punished for not making the most of their possession when Dempsey's long range shot went in via a deflection off centre-back Sylvain Distin.

It was a body blow for the home side but, after Spurs substitute Sigurdsson's shot hit the crossbar, the home side showed the character and spirit they are renowned for when Pienaar powered a ferocious header in from a Seamus Coleman cross.

Spurs barely had time to reflect on the equaliser before Apostolos Vellios's overhead kick fell for Jelavic to score the winner from eight yards, with Moyes coming on to the pitch in celebration.

"It is as good a finish as we've had. We've had a few like that where we've lost and felt low so we were due one.

"The position [fourth place] doesn't shame the way the players have been playing, they have been doing that well.

"But we could quite easily have slipped out and been in the bottom half of the league. It feels good today but we have to make sure we maintain that."

"It was a disappointing result bearing in mind we were leading taking the game into the last minute.

"It has been quite an adventure in the Premier League this season; if we count the number of results that have been going for us before the last minutes we would be first.

"There are so many different reasons. It is not really easy to explain because a couple of them come from different situations.