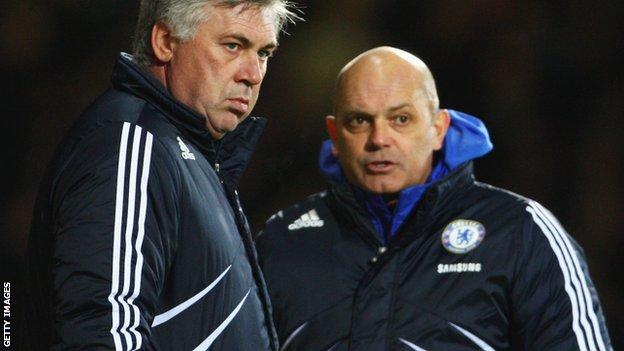 The Blues have had nine managers since Russian Abramovich took over in 2003.

Interim manager Rafa Benitez has failed to win any of his first three games, while ex-Barcelona coach Pep Guardiola has been linked with the role.

Wilkins, who worked under Abramovich for two years, said: "He is running out of options. If Guardiola was to come in and got sacked, where do you go?"

The 56-year-old former Chelsea midfielder was appointed in 2008 to work as Luiz Felipe Scolari's assistant but was then dismissed by Abramovich in November 2010 while alongside Carlo Ancelotti, who was then sacked at the end of that campaign.

Andre Villas-Boas replaced the Italian but he also found himself out of a job just nine months into his reign before being replaced by Roberto Di Matteo.

Despite winning the FA Cup and Champions League, Di Matteo was dismissed in November with Benitez handed a short-term contract to replace him.

Wilkins believes current Brighton boss and former Chelsea midfielder Gus Poyet would be an ideal manager for the club as options run low.

"[Current Real Madrid coach and former Chelsea manager] Jose [Mourinho] may not come back. Gus Poyet would be a good choice, he is cutting his teeth at Brighton and was a legend at Stamford Bridge," Wilkins told BBC Radio 5 live's Sportsweek programme.

"It is an interesting one, the options are now being closed down rather rapidly."

Meanwhile, Wilkins does not agree with claims Chelsea's players are not performing because of the fact Benitez, who led Liverpool to the Champions League title in 2005, has only been appointed on a short-term basis.