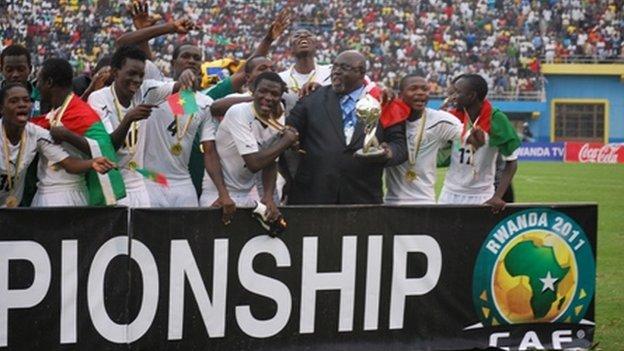 Reigning African under-17 champions Burkina Faso lost 3-0 in Tunisia and will not be in Morocco next year to defend their title.

Two first-half goals from Hazem Haj Hassen and one after the break from Chiheb Jebali in the second leg gave the Tunisians a 4-2 aggregate win.

Joining Tunisia and hosts Morocco at the African Under-17 Championships will be Nigeria, Ghana, Ivory Coast, Congo-Brazzaville, Botswana and Gabon.

Emmanuel Boateng opened the scoring early in the match as he converted from the penalty spot, Emmanuel Essigba grabbed the second midway through the first-half.

South Africa managed to score a consolation goal in the second-half but the Black Starlets held on to reach the finals after missing out on the 2011 tournament.

Congo, who finished third in Rwanda two years ago, beat Tanzania 2-0 in Brazzaville to overturn a first leg deficit and qualify for the finals.

Ivory Coast, who were also knocked out of the Under-17 World Cup at the same stage, beat visiting Senegal 2-1 to make it to the finals 3-2 on aggregate.

On Sunday, Botswana pulled off victory after a penalty shoot-out with Algeria, who had been in a strong position after securing a 1-1 draw in the first leg.

Another 1-1 draw in the return leg meant the sides need spot-kicks to decide the victor and Botswana came through 4-2.

Gabon took a one-goal lead to Benin, after the first leg ended 2-1, and they did just enough to qualify form the finals as they held their hosts to a 1-1 draw, for a 3-2 win overall.

The four semi-finalists from the African championship, that takes place between 13 and 27 April, will qualify for the 2013 Under-17 World Cup which kicks off on 17 October in United Arab Emirates.