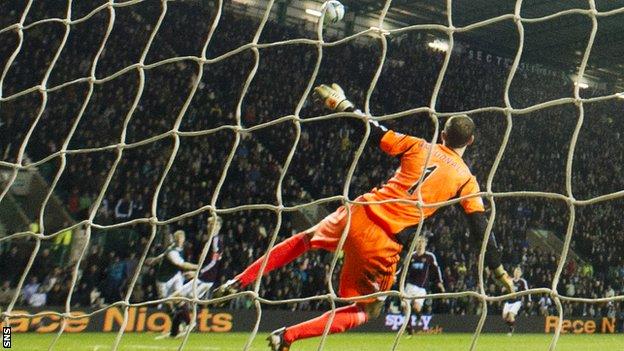 Hearts boss John McGlynn thinks his side did enough to earn a replay after the Scottish Cup holders lost to Edinburgh rivals Hibs.

"It looked as though it had 0-0 written all over it," McGlynn told BBC Sportsound.

"Hibs got the one piece of luck with the strike for the goal that takes a massive deflection."

Hearts started well, with Callum Paterson going close on a couple of occasions before Wotherspoon scored the only goal of the game, courtesy of a wicked deflection off Marius Zaliukas.

"We had a couple of really good chances in the early part of the game and we started really well," McGlynn said.

"If we had taken the lead it would've given us a massive lift. And, as the game wore on, it looked as though it was heading for 0-0.

"Neither team were creating a lot of opportunities to score and we were defending well and I thought we were in control.

"But Hibs got the one piece of luck with the strike for the goal that takes a massive deflection. And one that made it very difficult for Jamie Macdonald to get to."

"It was a blow because he had caused Alan Maybury a lot of problems and got some good deliveries into the box," he explained.

"In other games, if we don't take our chances and get in front, then we end up having to scrape a draw here or there."