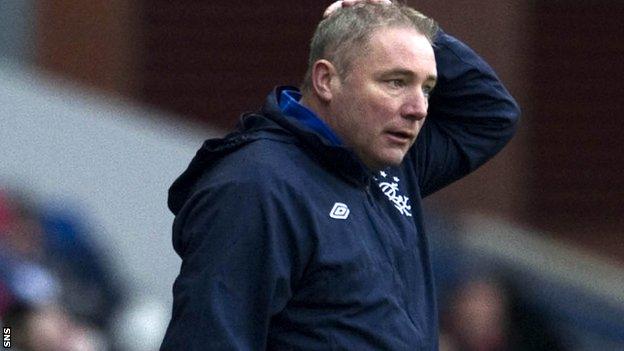 Rangers manager Ally McCoist insists being drawn against a Scottish Premier League side in the Scottish Cup "wouldn't scare us".

The Ibrox side booked their place in Monday's fifth round draw at Hampden with the 3-0 victory against Elgin.

"The main objective was to get through to the next round and be in the hat and we did that," he said.

"I wouldn't start screaming from the roof-tops that we're ready for anything but an SPL team wouldn't scare us."

And McCoist believes his side would have no fears against top flight opposition in the last 16 of the Scottish Cup.

"We performed well against Motherwell (in the Scottish Communities League Cup) and I thought the first goal in the game against Inverness (in the defeat in the next round) was going to be vital," he said.

"We didn't get it and we didn't play particularly well in the second half. It's not a crime being beaten by Inverness this season, as a lot of people know."

David Templeton made his Rangers comeback after recovering from ankle ligament damage and McCoist was happy with his side's efforts.

"I thought our goals were well executed and there were some really good individual performances within the team," said McCoist.

"One of the most pleasing aspects was keeping a clean sheet. We switched off a couple of times in the second half and the goalkeeper had a terrific save.

"I said to the lads before the game that Elgin score goals, that's what they do.

"They've got a good team going forward and it was an awkward tie for us so I'm really pleased."