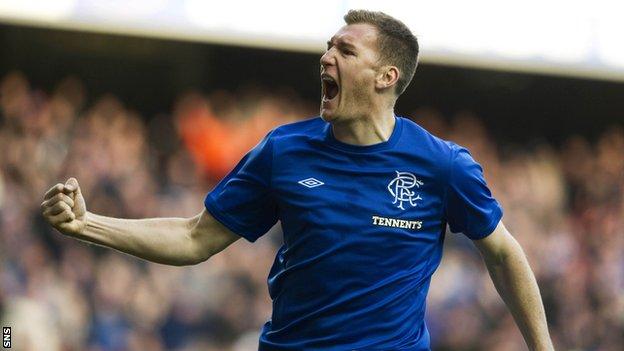 Kevin Kyle believes Rangers can become the first Third Division club to win the Scottish Cup now that confidence is high in the Ibrox squad.

The striker scored one and made another in who sit just behind them in the league.

They could be drawn against Scottish Premier League opposition in the fifth-round draw at 1300 GMT.

"I believe we are," Kyle said when asked if Rangers were good enough to win the trophy.

When you see some of the results, anyone is there for the taking

Rangers impressed in defeating Motherwell in the Scottish Communities League Cup in their first meeting with a top-flight side as a Division Three club.

But they were then dumped out by Inverness Caledonian Thistle in the following round.

"We showed against Motherwell in the League Cup how good we really were," said Kyle.

"We all blended well together that night and we turned Motherwell over.

"Against Inverness was the opposite - they turned us over.

"But it's just a confidence thing. As the weeks are progressing, we are getting better and more confident.

"We're getting a lot of players back from injury, so we have got a better squad.

"We've got to keep the league form going and, with the cup games, we've just got to make sure we turn up on the day.

"If we turn up, we're capable of challenging anyone.

"When you see some of the results, anyone is there for the taking."

Kyle would welcome a meeting with another top-flight side in the next round of the competition.

"We would take anybody, but we would like an SPL side because we want to pit our wits against the best teams in Scotland," he said.

"The gaffer wants us to go far in the Cup and, to win a cup or get to a cup final, you've got to beat whoever is put in front of you."

Kyle's goal was his first at Ibrox, with Dean Shiels and Kal Naismith also on the scoresheet, and he could have had another had an early strike not been harshly ruled offside.

"I've always said, if I got the opportunity to start games, that I would hopefully deliver and I was always confident I would," added the injury plagued striker.

"It was my second start and I got another goal, plus one ruled offside. I don't know if it was or not, but I can't see me having the pace to be offside.

"I was just pleased to get a goal. It's been a long time, with being out injured and stuff, to get back to this level and banging the goals in."