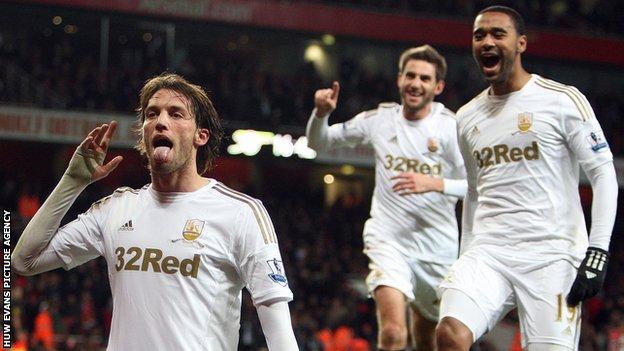 The 26-year-old has scored 10 goals in 15 Premier League games and Rangel believes big clubs will be preparing bids to sign his fellow Spaniard.

"That's something the club has to consider and he is a player we can't afford to lose," said Rangel after Michu's two goals beat Arsenal.

"Hopefully he will stay here for a long time and we can have good success."

Even before Michu's late double at Emirates Stadium on Saturday, Rangel had described the striker as the "bargain buy" of the season.

Swansea paid £2m to take the Spaniard from Rayo Vallecano, where he had scored 15 goals in 37 games in his debut season in La Liga, Spain's top division.

He became Michael Laudrup's third signing after the Dane took charge at the Liberty Stadium, and Michu - full name Miguel Perez Cuesta - revealed he rejected offers other suitors to sign a three-year deal with the Swans.

Two goals on his Swansea debut set the ball rolling, and his two against the Gunners makes him the Premier League's top scorer alongside Manchester United's Robin Van Persie and Liverpool's Luis Suarez.

"Not many players can score 10 goals in the Premier League. He has done a fantastic job. He gives us an aerial threat that we probably lacked a bit before.

"He is feeling comfortable, enjoying his life in Swansea and everyone is happy with him."

Not only will Michu's goals make him a target for Swansea's rivals, says Rangel, but a first call-up to the Spain squad could be a distinct possibility if the goals keep coming - particularly if Chelsea's Fernando Torres continues to struggle to recapture his goal-scoring touch.

"There are so many good players that can't get into the squad, but hopefully his goals will catch the eye of [Spain manager] Vicente Del Bosque and he'll get that call," Rangel said.

"It will be very difficult but if he keeps going this way then for sure he will get it."