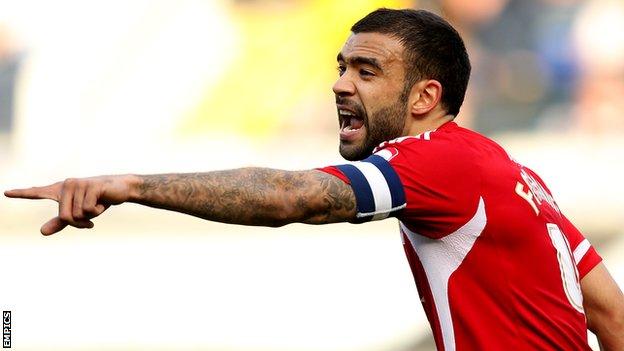 Captain Liam Fontaine has apologised to supporters for Bristol City's "unprofessional" 4-1 defeat at home to Wolves on Saturday.

The visitors, who had not won in nine Championship games, scored all their goals in 24 first-half minutes, with Neil Danns grabbing a late consolation.

The result leaves struggling City just two points off the bottom of the table.

"As players, all we can do is apologise for our level of performance," Fontaine told BBC Radio Bristol.

Derek McInnes's side have not won a Championship game at home since 25 August and are the only side in the Football League who have not kept a clean sheet this season.

"It wasn't acceptable and it was very unprofessional and uncharacteristic of us.

"We don't go out with the intention of playing like that and, for whatever reason, we got affected by what happened early on."

Last Saturday's 3-1 victory over Middlesbrough had lifted Bristol City out of the drop zone and Fontaine said the players had got their confidence back after a run of 11 games without a win.

But he admits they were baffled by their collapse against out-of-form Wolves: "We were scratching our heads at half-time.

"We're very inconsistent at the moment and we really need to show some fight and determination to do this."

"We couldn't say why because against Middlesbrough, and even at Brighton, we played some good stuff.

"We thought we had started to build on something. But in the first half it was totally unacceptable."

"I wouldn't say we're in trouble but we are in a bad position and that performance opened us up to criticism," he added.

"We do have the ability within the team but we've got to try and replicate it every game.

"We're very inconsistent at the moment and we really need to show some fight and determination to do this."