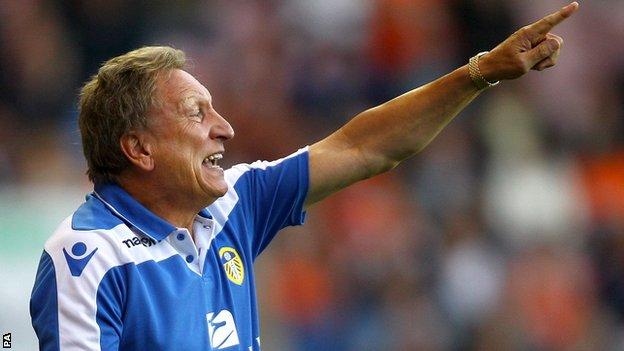 Manager Neil Warnock believes the loan signings of Alan Tate and Jerome Thomas have been the key factor in turning around Leeds United's season.

"It all changed when we managed to get Thomas and Tate, two excellent players," Warnock told BBC Radio Leeds.

"If they hadn't come I think we'd have been pushing bottom three now."

He continued: "Those signings gave everyone at the club a lift. They all knew we needed help, we had suspensions and injuries, but I'm delighted we turned it around quickly."

Leeds have won all three matches since signing 30-year-old defender Tate from Swansea and West Brom winger Thomas, 29, at the end of November.

Warnock said striker Luciano Becchio, who scored twice against the Terriers, was only now beginning to show his best form - despite those goals bringing his total to the season to an impressive 14.

"He's just starting to play now and it just shows what he can do because he's not had a great season, not by his standards," added Warnock.

"But when he plays like that he's unplayable at times. His contribution was fabulous and the header was as good a goal as I've seen him score."

"I've been speaking to them on an almost daily basis, and they even called to wish me happy birthday," the United manager revealed. "It's great to have contact like that and long may it continue.

"In terms of the table, we just need to concentrate on ourselves now.

"Every game is winnable for us, that's how we have to look at it. Sometimes we'll get disappointments, but that's the Championship.

"We have a good squad and are now just looking forward to the next game."