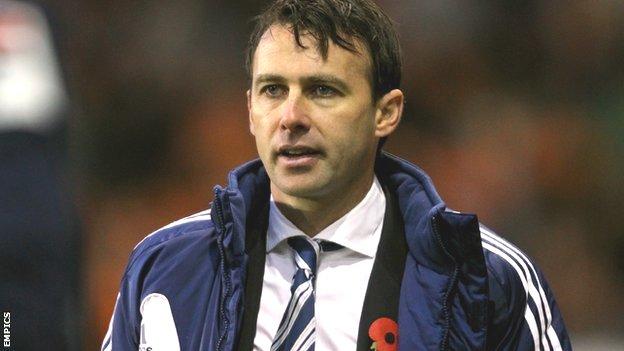 Bolton manager Dougie Freedman believes he has learnt more about his side following his first loss since taking over at the Reebok.

The Wanderers conceded an injury-time goal to lose 2-1 at home to Ipswich.

"I learnt with 20 minutes to go we can't see the game out," he told BBC Radio Manchester.

"Were we comfortable winning 1-0? I don't think we were. We need to be able to play in a certain way to see the game out."

Bolton took the lead through a stunning 25-yard Mark Davies strike and, despite dominating the game for large spells, were unable to get a second goal.

They were made to pay by Mick McCarthy's side as a DJ Campbell penalty and then a last-minute Michael Chopra goal meant the Tractor Boys took all three points.

Bolton went into the match unbeaten in their first six games under Freedman, which is a post-World War II record for a new Wanderers manager, and he believes he has work to do after conceding two second-half goals.

"I don't think players' mindsets are 'we can win 1-0,' so they need a bit of help and we'll try give them that help," he added

"The opportunities were there, we created the chances we just didn't take them and if you don't take them you are always going to be on the back foot.

"I just felt we couldn't see the game out. I've learnt more today than I have in the last five or six matches."