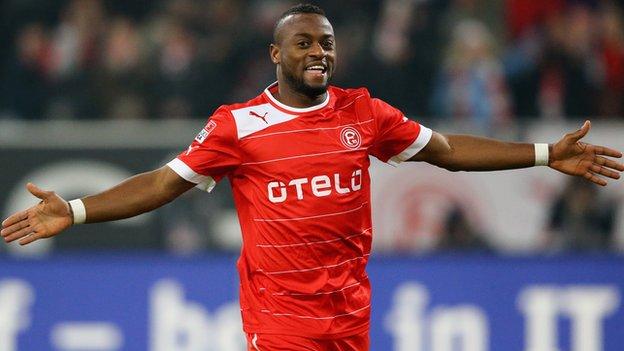 Angolan striker Nando Rafael (pictured above) scored his third goal of the season - and his second in the Bundesliga - in Fortuna Dusseldorf's convincing 4-0 victory over Eintracht Frankfurt. Rafael's lopsided strike from six yards crossed the line in the 58th minute.

Marseille bounced back form a 4-1 thrashing last time out to beat Brest, thanks to goals from Souleymane Diawara and Andre Ayew. The Senegal defender fired in his side's first goal from the edge of the box after the half hour mark, having been set up by English midfielder Joey Barton.

Ghanaian Ayew secured the three points when he poked the ball home the winner from a corner in the second half after Brest had levelled.

West Ham's African players Mohamed Diame and Modibo Maiga both struck to inspire a come-from-behind 3-1 win over Chelsea in the English Premier League.

Senegal midfielder Diame came off the substitutes bench to fire in a crisp strike from Carlton Cole's lay-off to put the Hammers 2-1 ahead.

In injury time Malian international Maiga, who also came off the bench, swept the ball into the roof of the net after Matt Taylor's low shot was pushed out by Petr Cech to add gloss to the scoreline.

Cameroonian centre-back Sebastien Bassong found the net for the second time in three games to set Norwich on their way to a 2-1 win over Sunderland. The defender pounced in the eighth minute at Carrow Road, charging in to volley home a Robert Snodgrass free-kick from close range.

Kevin Prince Boateng had mixed fortunes for AC Mlan at the weekend. The Ghana midfielder scored a fine goal on the turn from the edge of the area to help his side win 3-1 away to Catania. But Boateng was sent off later on for a dangerous tackle.