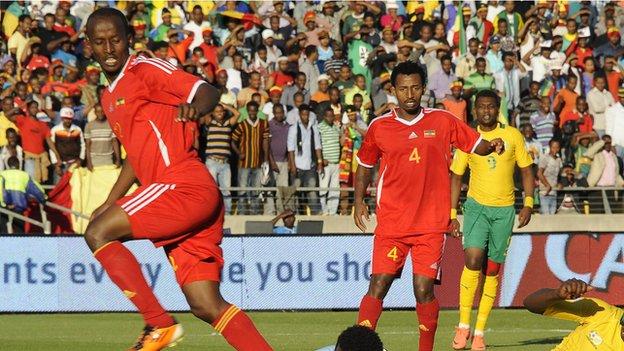 The Eritrea Football Federation has withdrawn its team from the African Nations Championship tie against neighbours Ethiopia.

The Confederation of African Football has confirmed the decision but gave no reason for the Eritreans withdrawal.

On Tuesday the Ethiopia Football Federation had asked Caf for the qualifiers to be moved to a neutral venue as the neighbouring countries continue to be embroiled in a border row.

It is not immediately clear if either development led to the Eritrean decision.

The teams had been set to play in the Eritrean capital, Asmara, between 14-16 December, with the return tie in Addis Ababa two weeks later.

It means Ethiopia will now play Rwanda in the next round, with the first leg set for 21-13 June.

But even before the Eritreans withdrawal, Ethiopia had said they would not travel to the Red Sea state.

"We want the matches to take place, but we're not willing to travel there and it is obvious their government won't allow their team to visit Addis Ababa," said Ethiopian Football Federation spokesman Melaku Ayele.

"So we've proposed an alternative venue, neighbouring Sudan, for both matches to be held in."

Ethiopia and Eritrea fought a border war between 1998-2000 that killed tens of thousands of troops. A Hague-based independent border commission ruled that the flashpoint town of Badme belonged to Eritrea but the village remains in the hands of Ethiopia and the spat remains unresolved.

The African Nations Championship, played every two years, is the continent's second biggest tournament in which only domestic-based players can take part.

Ethiopia, nicknamed the Walyas, recently sealed a spot at the more glamorous Africa Cup of Nations finals set for January after a three-decade absence.

Ethiopia and Eritrea were last pitched against each other in 1998 in a qualifying round for the 2000 African Nations Cup, just months after fighting broke out along their sun-blasted border.

Ethiopia declined to take part in those matches.