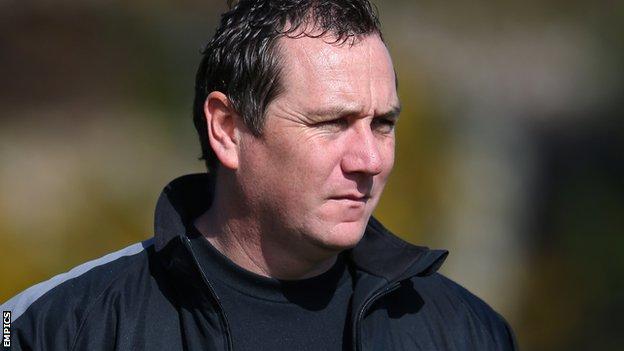 The 40-year-old was fired after the 3-2 home defeat by Aldershot in the FA Cup, despite the Cod Army sitting in the League Two play-off places.

We don't have anyone in mind. We have a blank sheet of paper and it's about making the right decision

"Ultimately I've got to stand up and be counted and that's the decision I've made," he told BBC Radio Lancashire.

"There are things that go on in businesses that influence decisions and we felt that the time was right."

Mellon joined the club in 2008 from Burnley where he was working as a youth-team coach and in 2009-10 he took Fleetwood out of Blue Square Bet North via the play-offs.

In their first season in the Blue Square Bet Premier, Fleetwood lost in play-offs to AFC Wimbledon.

A year later the Scot guided the club to the Football League as champions and they also reached the FA Cup third round for the first time.

The Cod Army have spent the majority of this season in the top seven of League Two, but Pilley decided to take action after losing the past three games.

"He has undoubtedly been a superb manager for Fleetwood over the last four years he's been here," he added.

"We've gone from being a part-time club at the bottom of the Conference North to a full-time club in the play-offs in League Two, but it's not about the past, it's about the present and the future. "

The job for Pilley, who has reportedly invested more than £10m into the club, is now to find a new manager.

He has revealed the Fylde-based side received applications the day after Mellon was sacked, but he is in no rush to appoint anyone.

"We had a lot of applicants and we'll be doing our due diligence on them and hope to have some interviews by the middle of the week," he stated.

"We have a total open mind. We don't have anyone in mind. We have a blank sheet of paper and it's about making the right decision.

"It's not going to be a race, but equally if somebody comes along and really, really impresses us, there is no reason why we won't make a quick appointment.

"That said it could be two weeks as it has to be the right appointment."