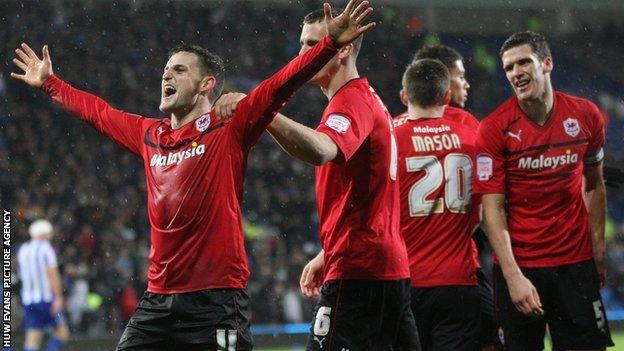 Three hundred First Battalion Welsh Guards parading on the pitch and a song steeped in military history blasting over the sound system. Sheffield Wednesday had stepped into the home of a side marching into the record books.

"Welshmen will not yield" - the closing line of Men of Harlech, as accurate as it is loud ahead of each kick-off at the Cardiff City Stadium this season. The Bluebirds don't lose here, they don't even draw.

It means that our fans come here excited every week.

Ten home games, 10 wins. The best home record in Europe. Not even the return of former City boss Dave Jones could stop this latest act of defiance, as Cardiff tinkered with their own history.

The defeat of Wednesday bettered a run of nine successive home wins set in both the 1951/52 and 2000/01 seasons. Both those runs came in promotion-ending seasons. City's home and colours may have changed since, the mission remains the same.

Home form has brought the comfort of the top spot, but this run has been no procession.

Malky Mackay has had to suffer men down in action. Four players have headed straight for the treatment room after 25 minutes or less in home games this season.

But Mackay's side have shown they can adapt. The willingness of teenagers Ben Nugent and Joe Ralls was called upon in wins against fellow promotion hopefuls Hull City and Middlesbrough.

Defender and Captain Mark Hudson made sure there would be no City ceasefire, with decisive goals in three of the 10 home outings.

"I'm very proud of the group and it builds a little bit of momentum," said Mackay on City's new record. "It means that our fans come here excited every week. They're putting an atmosphere into this stadium that can make teams tentative from the kick-off. You've seen that a few times where we've caught teams cold this season."

Last gasp winners have played their part too. Huddersfield Town and Watford each surrendered at the death. Burnley and Blackpool blitzed early in contrast.

It's a run which puts Mackay's side ahead of an elite band of European clubs. Nine other sides boast perfect home records, none have played as many times as the Bluebirds. Shakhtar Donetsk, Partizan Belgrade and Steaua Bucharest are among those making home tough for the enemy.

Among such names, there's a hint of glamour to City's achievement. But it's the grit displayed in victories such as Sunday's over Sheffield Wednesday which Mackay believes has given his side impetus.

He added: "When we play against teams and the game becomes a grind. When teams put men behind the ball and ask you questions of having to break them down. They're the days where you have to be patient and today was certainly one of them. At half-time my message was be patient."

His side were. Craig Conway's own patience in sitting on the sidelines for large parts of the campaign, rewarded with a drilled winner 10 minutes from time. History re-written with 10 minutes to spare.

Mackay stood and bellowed at his troops for almost 95 minutes of play, as his side rebuffed an injury-time onslaught from the visitors. Supporters puffed out their cheeks on the final whistle, their relief evident.

If history is to repeat itself, and City's home form is a precursor to promotion, more tense days stand before the Bluebirds, who are no strangers to end-of-season let-downs in recent years.

They reached play-off semi-finals in 2011 and 2012, only to suffer more disappointment.

Sunday's opposition manager Dave Jones, who was sacked as Cardiff manager in May 2011 after failure in the play-offs has no doubt his former team have what it takes - and he credits much of that to the amount they have spent on players.

Whatever the wage bill, Cardiff City seem in the mood to finally atone for the heartache of recent years.