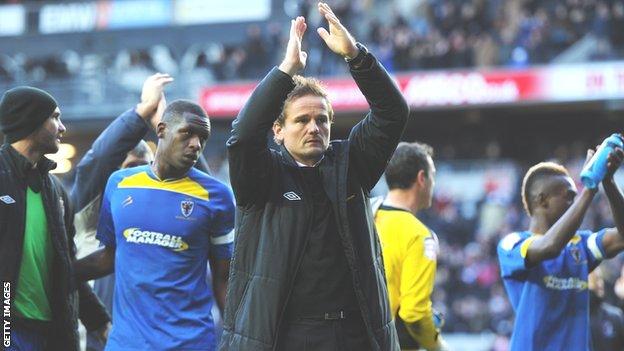 AFC Wimbledon manager Neal Ardley believes his players have done the club proud despite their defeat by MK Dons.

They were beaten 2-1 by MK on Sunday in their FA Cup second round tie.

He told BBC London 94.9: "My main fear was not doing the fans proud. Despite hurting from the defeat, I think we've done that.

"This was a celebration of how far this club has come in a short space of time. The main thing was to have a real go at it on the pitch, and we did that."

The Cup tie was the first meeting between the two clubs.

AFC were formed 10 years ago by supporters of the old Wimbledon FC in protest to the club's planned move to Milton Keynes, which occurred a year later and saw the club's name changed to MK Dons in 2004.

"We worked hard on a game plan and we felt it was the best way we could cause an upset," Ardley added.

"Every single player, to a man, carried those instructions out nigh on to the letter.

"We're not going to play against teams who play the way they do very often. It was a little bit of a rarity to set up differently and we were as drilled as we could possibly be.

"We were inches from going 2-1 up prior to [Otsemobor's winner] so we couldn't ask for any more.

"I am proud of how we handled the week and the moment a lot of our fans dreaded has come and gone."

Ardley will now turn his attentions to attempting to pull the club clear of the League Two relegation places, with the Dons currently two places and one point above the drop zone.

"It won't be an overnight fix. We've had a heavy schedule prior to the FA Cup tie.

"We'll work at it and hopefully the consistency will start to develop."