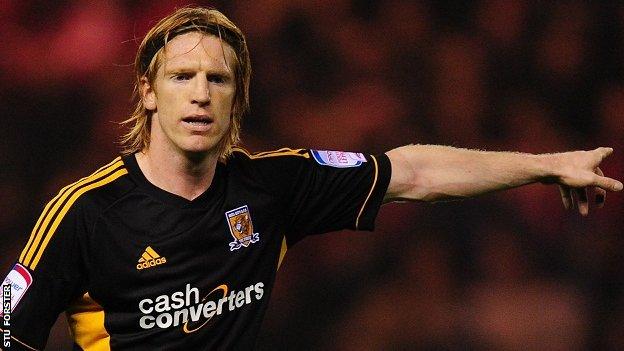 Match-winning defender Paul McShane has promised to do his utmost to repay manager Steve Bruce for rescuing his career at Hull City.

McShane, who scored the Tigers' second in their 2-1 win at Nottingham Forest on Saturday, is thriving after being brought back in from the cold by Bruce.

The 26-year-old told BBC Radio Humberside: "Steve Bruce has given me a chance, which is all I wanted.

"I never had that chance under [previous manager] Nigel Pearson."

The Republic of Ireland international's goal was his first for almost four years for City, his last coming against Liverpool at Anfield in 2008.

"It has been a long time, but then I haven't really played in the last two years for Hull, I've been out [on loan] trying to get some games," added McShane.

"But this season has been good and hopefully it will keep going nicely.

"I never had a chance under Nigel Pearson, straight away he got rid of people he didn't want.

"I'm enjoying playing in the centre as well, it's where I'm most comfortable so the gaffer [Bruce] has been brilliant for me.

"You're in your late 20s and early 30s when you're at your peak for a centre-half. I'd love to be here for that.

McShane was a regular for City during their two seasons in the Premier League, but under Nigel Pearson and then Nick Barmby started just 14 games in the subsequent two seasons and went out on loan to Barnsley and Crystal Palace.

With Bruce favouring a 3-5-2 formation, McShane came back into the picture and has impressed his manager and the club's supporters in recent games.

"As a former centre-back himself he sometimes gives me advice but it's nothing major, just little boosts to your confidence," said McShane. "He's been good for me and great for the team, he's a good man-manager."

The win lifted Hull to fifth in the Championship, but McShane said it was too soon to start making predictions.

"The Championship, as anyone knows, is a mad old league and a couple of wins can shoot you right up to the top of the table. It only starts to take form in the new year," he said.