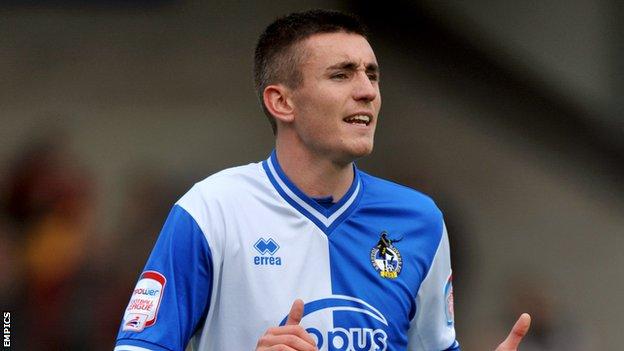 Bristol Rovers boss Mark McGhee has said he was "embarrassed" by midfielder Matthew Lund's sending off in their 2-0 defeat by Wycombe on Saturday.

Stoke loanee Lund, 22, received a second yellow card for a late challenge on Stuart Lewis in the 93rd minute.

It was the fourth time in four games a Rovers player had seen red.

"It was ludicrous and embarrassing. I just hope he learns from it and never, ever does it again," McGhee told BBC Radio Bristol.

It was the sixth sending off for the League Two club this season, and McGhee admitted young midfielder Seanus Clucas was lucky not to see red for a rash challenge in their 3-3 draw with Bradford the previous week.

Speaking about Lund and Clucas's behaviour, the Scotsman added: "That has got to be the last time in their careers that they ever cause themselves to be sent off in those circumstances.

"It's different if Seanus goes sliding in to save a goal or we're drawing 0-0 and Lund brings someone down to save them scoring a goal.

"But when we are losing 2-0 and are still in with a chance and to get themselves sent off is irresponsible and immature. I can't think of anymore adjectives to describe how bad that was."

He concluded: "Hopefully that was a learning process for Lund. All we can do is educate them. I've never been a believer in the value of fining players; it's more than that.

"It has to be in their brains and their hearts. They have to understand they can't get themselves sent off."