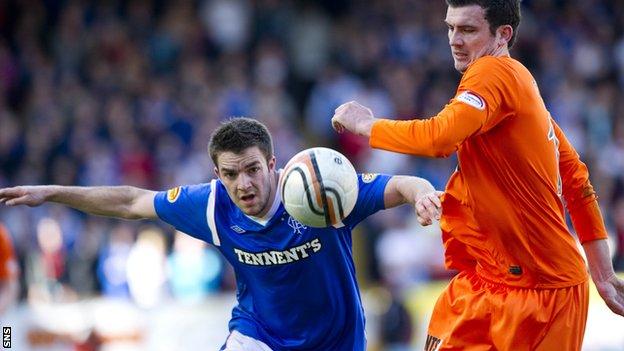 Hibernian will host the winners of the Aberdeen-Motherwell replay, while Ross County or Inverness Caledonian Thistle will travel to Kilmarnock.

St Johnstone will set up a third all-SPL tie away to St Mirren if they beat Cowdenbeath in their re-arranged tie.

Raith Rovers will host the winners of the Celtic versus Arbroath replay.

SPL leaders Celtic must travel to Gayfield next Wednesday as they look to secure a trip to Kirkcaldy after the Second Division part-timers secured a surprise draw in Glasgow.

The First Division side famously shocked Celtic in the 1994-95 League Cup final.

Arbroath goalkeeper Scott Morrison believes his side merited the draw in Glasgow for the right to lock horns at Gayfield.

"I remember taking a by-kick once and having to tip it back over my bar because of the wind," he said.

"So, it's a fortress in itself sometimes and has its own personality. Hopefully, we can play to our strengths and get something out of the game."

Celtic winger James Forrest, who is sidelined with a hamstring injury, said he was confident they would book their place in the last 16.

"We've got the squad to compete in all competitions and we know we can cope with them all," he said.

Kilmarnock manager Kenny Shiels picked out the clash between Dundee United and Rangers as a particularly attractive fixture.

"Dundee Utd and Rangers, which one do you class as the favourites there?

"I know that Dundee Utd have put Rangers out of the Cup last season, and there might be a little bit of revenge there.

It is a fixture which looks to have already attracted some controversy, with a Rangers fans' group urging supporters to boycott the match.

"The Rangers support has waited patiently for the opportunity to send a clear message to those that tried to destroy our club - starve them of their much-needed cash by boycotting this game," said a Rangers Supporters Assembly statement.

"It must also be remembered the disregard this club had for Rangers supporters when it unashamedly refused to offer refunds to supporters for a game abandoned due to a waterlogged pitch in 2009."

Hibs captain James McPake told his club's official website: "The draw could've maybe been a little kinder, but first and foremost it's a home tie and that's what we wanted."

Highland League side Turriff United, playing in the tournament for the first time, will earn themselves a trip to face SPL strugglers Dundee should they win their replay away to First Division outfit Morton.

At least one Division One side will make it through to the sixth round after Dunfermline Athletic were drawn at home to the winners of the replay between Dumbarton and Hamilton Academical.

First Division side Falkirk will start favourites in their home tie against Forfar Athletic from the league below.

Rangers face the side who knocked them out of last season's tournament days before the Glasgow club went into administration.

It is the first time Rangers will have faced top-flight opposition in this tournament since becoming a Third Division club.

They defeated Motherwell in the Scottish Communities League Cup in their first meeting with SPL opposition this season before losing to Caley Thistle.

Holders Hearts were not in the draw after their 1-0 defeat by Edinburgh rivals Hibs.