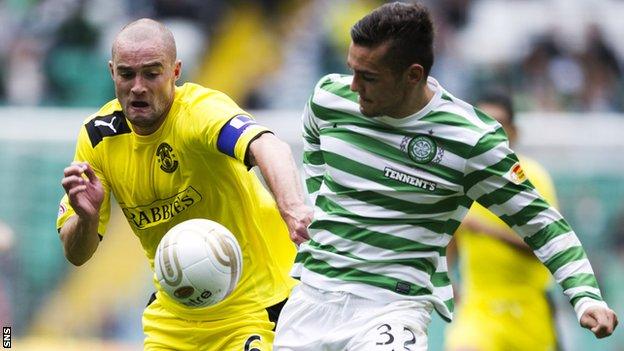 Scottish Premier League clubs have unanimously agreed to pursue their plan to expand the top flight to two divisions of 12 teams.

Chief executive Neil Doncaster says the present 12 clubs were united at their meeting at Hampden Park.

The 18 refers to the remaining SFL clubs not included in the top leagues.

Dundee United chairman Stephen Thompson's resignation from the SPL board last week had placed some doubt on the ability of the 12 clubs to produce a consensus.

However, after a three-hour meeting at Hampden, Doncaster emerged to say that agreement had been reached with a plan that would result in the two leagues splitting into three leagues of eight midway through the season.

"I'm delighted to say that we have unanimously agreement in principle from the 12 SPL clubs to the 24-18 team model," Doncaster told BBC Scotland.

"What we aim to have is a consensus model that cares for all of Scottish football and that's got to be objective."

However, the SPL has been speaking informally to SFL clubs and the top flight believes it has the numbers necessary to gather sufficient support.

The SPL would invite clubs to enter the league, determined by their league positions prior to the start of any re-organised season.

It hopes that this would head off criticism from those who might argue that re-organisation is being used as a vehicle to accelerate Rangers' return to the top division.

Rangers, now controlled by Charles Green's consortium after the old organisation went into liquidation, are playing in Division Three.

Doncaster did not wish to go into detail about what was on offer for the SFL clubs and the mechanics of any change.

"I think it's important to show those teams the respect they deserve and talk to them first," he said.

"There was no formal vote today, but every club gave an informal indication of where they were and, on the back of that, we got 12 clubs unanimously agreeing to this on an in principle basis.

"Unanimity among SPL clubs has sometimes been difficult to achieve when talking about reconstruction.

"We are in a position where we have that unanimous in principle agreement from the 12 clubs about their preferred way forward.

"We understand that there needs to be a lot of redistribution from the biggest clubs and that is something the clubs in principle bought into today."