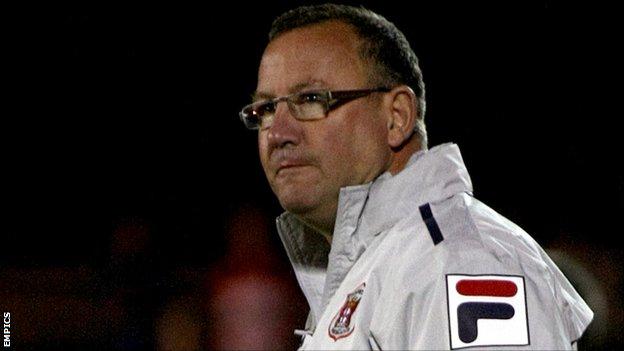 Among the absentees were senior professionals James Berrett, Rory Loy and Lee Miller, as the Cumbrians slumped to a fourth loss in five games.

"I can't wait until we get everybody fit and we get that boost," Abbott told BBC Radio Cumbria.

Trouble on the home front

United have been unfortunate with injuries this season, beginning the season with strikers Lee Miller and Rory Loy unavailable due to long-term problems.

In addition, niggly injuries to captain Paul Thirlwell, who was drafted in at late notice to Saturday's line-up, midfielder Jon-Paul McGovern and experienced defender Peter Murphy have taken their toll on Abbott's squad.

Young players such as Mark Beck, who scored the Cumbrians' consolation, David Symington and Brad Potts have come through to contribute in their place, and

Meanwhile, defeat by Bournemouth came seven days after United ended a four-game run without a victory at Yeovil in League One.

Yet it has been home form that has stalled Abbott's side's progress, with just five Brunton Park victories to show from 16 fixtures in all competitions.

"One or two wins are required," Abbott added. "We need to do better at home to get belief from the fans and believe from within on the pitch.

"We aren't going to throw the towel in but we do know how difficult it is when you are up against powerful financial clubs.

"There have been other games where we just haven't played very well, but today they were better than us."