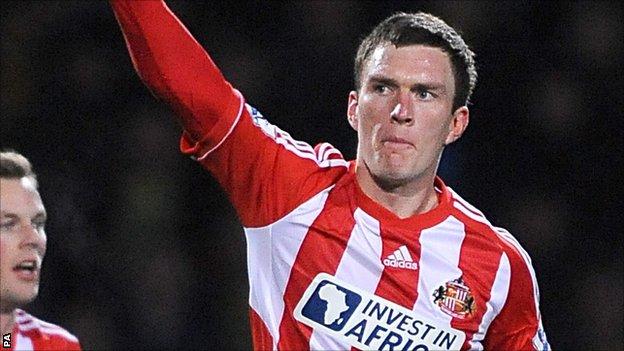 The Black Cats midfielder scored at the end of the first half with Norwich 2-0 ahead and struck the woodwork twice in a much-improved second period.

"We need to take it on from the start," Gardner told BBC Newcastle.

"There are no excuses. If we play like we did in the second half then we'll win games comfortably."

Gardner added: "There's probably not one team that has come here and played Norwich off the park like we did in the second half.

"They battered us first half but we ragged them about in the second period and had five or six chances."

Among the players to impress in the second half was former Ipswich Town striker Connor Wickham, 19, whose introduction as a substitute for the injured Steven Fletcher marked only his second club appearance this term.

"He's been working solid for a month or more and he's come on and looked sharp," Gardner continued.

"It's nice to see people come on off the bench and fight, and that's what we need, players who will fight."

Wickham, in particular, has been working closely with former Leicester, Port Vale and Celtic winger Steve Guppy, who was brought to the Stadium of Light by his former mentor Martin O'Neill as first-team coach.

"Steve has been brilliant. You go to him for quick-feet training or extra shooting and he'll do it. There's never a no from Gupps," Gardner continued.

"He's been a breath of fresh air, he's great to have around."