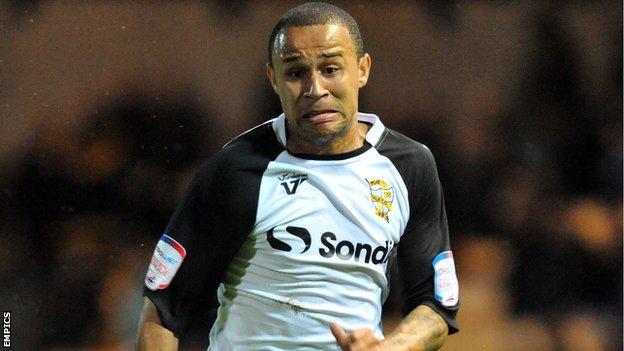 Port Vale are intent on making it to Wembley in the Johnstone's Paint Trophy final for their fans, insists winger Ashley Vincent.

But Vincent insists that a trip to Wembley on 7 April has to be a target.

"It would be massive after all the fans have been through," he told BBC Sport.

Vincent, 27, was part of a winning Cheltenham Town team in May 2006, the year before the rebuilt Wembley reopened.

For any footballer born in Britain, Wembley is the Holy Grail

But, for all the thrill of playing in a Cardiff final, he admits that nothing compares to the lure of Wembley.

"I played at the Millennium Stadium in a play-off final," he told BBC Radio Stoke. "But, for any footballer born in Britain, Wembley is the Holy Grail.

"And I'm guessing that hardly any of the lads have played there.

"And, although it isn't the FA Cup, it's still a cup competition that you want to win.

"We've got a home tie and, after all the turmoil off the pitch, now it's coming right it would be a great day to be involved in.

"There are some big teams still left in the northern section, so it will be tough to get there. But we showed against Sheffield United on Saturday that we're playing well."

Vale are hampered by the loss of three players, Ryan Burge, Richard Duffy and 21-goal top scorer Tom Pope having all picked up their fifth bookings of the season at Bramall Lane.

But they have already enjoyed their share of cup magic in this season's competition, with teenage keeper Sam Johnson's penalty shootout heroics in the last round at Walsall in October.

After Vale came back from two down to draw 2-2 at Bescot, the 19-year-old six foot seven debutant saved from Walsall keeper Karl Darlow, then fired the winning penalty for a 6-5 victory.