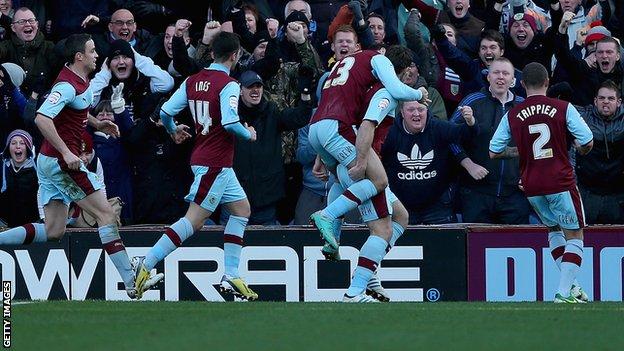 Burnley striker Sam Vokes has said it felt "fantastic" to come off the bench and rescue a point against Blackburn.

The Welsh striker replaced Chris McCann in the 86th minute and scored three minutes later in the 1-1 draw,

"When you get five or 10 minutes off the bench, there is a chance to make an impact and obviously to get the goal is a fantastic feeling," he said.

"In front of the home fans it was brilliant feeling."

Despite Burnley enjoying large periods of possession at Turf Moor, they fell behind when Jordan Rhodes scored with a diving header from a Mauro Formica cross.

However, 23-year-old forward Vokes, who joined Burnley in the summer for an undisclosed fee from Wolves, came off the bench to score his second goal of the season.

There was some questions from fans when manager Sean Dyche brought him on, but the former Watford boss was confident he could make an impact.

"Somebody said to me what he's going to do in five minutes?" Dyche told BBC Radio Lancashire.

"I think the records will show what he did in five minutes and then he could've had another one.

"We're please with the effect the group are having. It's not just any given 11, it's about the mentality of the group.

"I thought we deserved it and overall, if you look on reflection of the whole game, the first half I thought we were as dominant as a side can be.

"Overall really, really pleased. I thought it would have been a travesty if we had lost it for sure, but we should've won it."