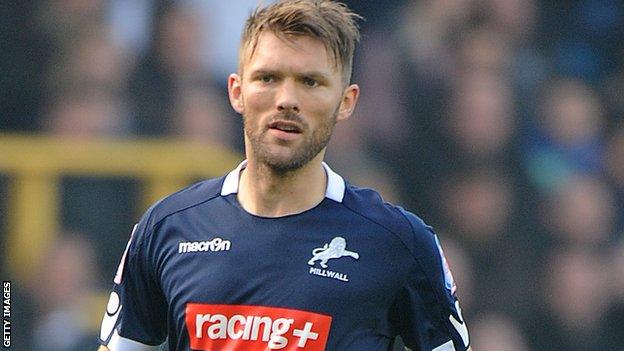 The 34-year-old is set to return to the New Den in January and his contract with the Lions runs until the summer.

But Ward told BBC Wiltshire: "I spoke to the manager [Kenny Jackett] a year ago and I was honest - I said I wanted to leave and have a new challenge.

"It's taken time to find a club which I'd like to give it a go with and hit the levels I'd like to hit."

He added: "Whether it's the league below, a league higher or abroad it was really a case of where I feel I'd be comfortable."

Ward first joined Millwall from Watford in 2001 and spent three and a half years at the club, making 161 appearances.

He went on to have spells at Crystal Palace, Wolves and Charlton before returning to the Lions on loan and re-joining on a permanent deal in January 2010.

Ward opted to join Swindon in the summer and has since played 15 games.

Although he is certain his future lies away from Millwall, the defender would not be drawn on whether he could see a future at the County Ground beyond his loan spell.

"I tend to deal with things day by day. When it comes to football you have to be very wary and cautious on different situations that could come up.

"I'm enjoying it and I want to keep enjoying it but I really want to start helping to get some wins and keep high up this table."