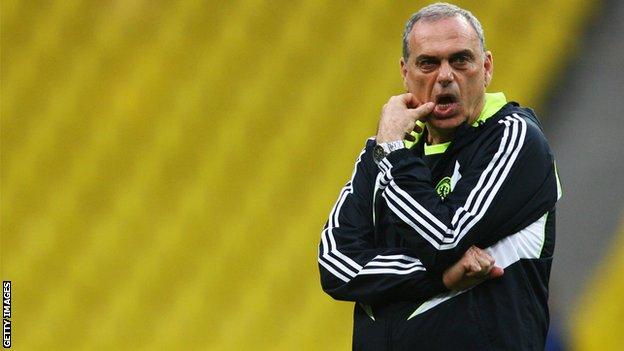 Several newspapers reported Grant, who guided Chelsea to the Champions League final in 2008, was being recruited in an advisory role.

"There is no truth in reports that Avram Grant will be returning to the club," said a spokesman.

Many Chelsea fans were angered by the dismissal of Di Matteo and his replacement with former Liverpool manager Benitez.

Benitez is under pressure less than two weeks into the job after Saturday's 3-1 defeat by West Ham, which followed goalless draws against Manchester City and Fulham.

Grant, 57, is well regarded by Blues owner Abramovich and is available after leaving Partizan Belgrade in May.

He managed Chelsea from September 2007 after Jose Mourinho's departure and took the club to second in the Premier League but was sacked after eight months following the Champions League penalty shoot-out defeat by Manchester United.

Chelsea have had nine managers since Russian Abramovich took over in 2003, and former assistant boss Ray Wilkins has said the owner is running out of options.

As West Ham fought back from a goal down at Upton Park to beat Chelsea for the first time since 2003, visiting fans chanted: "Roman Abramovich, is this what you want?"

Abramovich met seven supporters at the club for about an hour before Benitez's first match in charge, against Manchester City on 25 November.

One fan who was at the meeting said director Eugene Tenenbaum acted as translator during a "candid" dialogue.

"Roman listened intently to all of our opinions and questions. I am sure that he understood the gist of what we were all saying," said the supporter, who does not want to be named.

David Johnstone, spokesman for fanzine cfcuk, said he was not invited to the discussion but would welcome further talks between the owner and fans.

"We have fans' forums during the year with the club although the owner does not attend these and supporters wonder how effective they are," he said.

"Roman Abramovich has been brilliant for us and it would be wonderful if he could meet with the supporters more often. Whoever advises him has got it seriously wrong this time with Benitez."